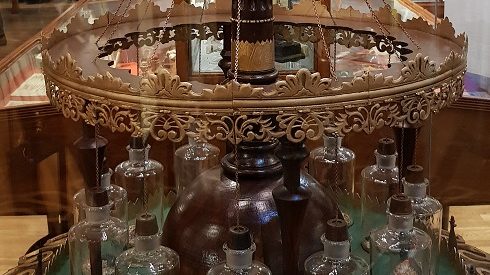 Dirk Dynamo stood on the roof of the Epiphany Club, a gentle summer breeze bringing him the smoke of Manchester’s cotton mills and the noise of its crowds. Below, the city was a sprawling mass of factories and tenements, a coal-smeared wonder of the Victorian age. Fortunately, he wasn’t up here for the view.

“It predicts storms,” Sir Timothy Blaze-Simms explained, patting a strange creation of brass boxes, oiled gears, and slender jars. “The slugs in the jars become agitated as the atmospheric pressure changes. They move up, trigger the levers, and so set off strings of gears. When enough gears fall into place, the alarm sounds.”

“And this works?” Dirk asked, trying to hide his incredulity. Blaze-Simms had a brilliant mind, but sometimes his imagination got away from him.

“Absolutely. I have seen a near-perfect correlation between agitation in the slugs and the arrival of storms over the city.”

“Then why are the slugs moving now?” Dirk pointed at one of the jars. “Sky’s clear today.”

“Perhaps an unexpected squall. I have noticed storms coming in faster of late.”

Dirk crouched to get a closer look at one of the slugs. It was wriggling hard up that jar. If a slug could get angry, this one was pissed as hell, and he would have been too if someone had trapped him in a jar.

“When you say ‘of late’, do you mean since you built this machine?”

“I suppose so. That is when I started paying attention.”

Dirk looked up. Out of nowhere, small grey clouds were forming above their heads. He figured he should be grateful – rain would help clear the air. But still…

“You sure you’ve understood this right?” he asked. “That the storm’s making the slugs angry, not the other way around?”

“They’re not angry, old chap. They don’t have the capacity for it. They’re just agitated.”

Clouds were moving in fast. A fat drop of rain hit Dirk’s face. The bell at the top of the machine started ringing as more slugs slid up their jars.

“You ever consider that the slugs might be making the storms?” Dirk asked. “That this might be what happens if enough of them get mad in the same place at once?”

“Don’t be absurd. They couldn’t possibly-”

A roar of thunder interrupted Blaze-Simms. Lightning flashed down to strike the roof of the town hall.

“Most folks would say that weather-predicting slugs were absurd. How about a storm coming in this fast?”

Rain fell, pattering down at first, then thundering across the rooftops, while arcs of lightning flashed between the clouds.

“The very idea! It goes against all of science.”

“All the science you know. But what if you’ve found something new?” Dirk pushed back his rain-sodden hair. He could already feel a chill sinking into his flesh. He wanted to get into the warm and dry, but the idea had hold of him and he couldn’t let it go.

Blaze-Simms’ eyes widened. An expression of frustration tilted up into a smile.

“Well, perhaps,” he said. “But how could we possibly know? What experiment would let us reveal-”

Dirk yanked one of the jars out of the machine and dropped its slug onto the rooftop. Then he reached for another jar.

“We let them out and the storm stops, that’s your correlation. You can work out how they do it later.”

Blaze-Simms joined him, excitedly dismantling his own machine, releasing its slimy prisoners as fast as he could. He grinned as the rain soaked them to the bone and washed away the smoke clouds shrouding the city.

“This could have countless uses,” he said. “Watering fields, refreshing the air, refilling reservoirs…”

Dirk dropped the last slug and looked up. Was it his imagination or were the clouds parting?

“One thing at a time, Tim,” he said. “First, let’s see if this works. After all, it rains a lot in Manchester.”

Unlike Blaze-Simms’ storm predictor, George Merryweather’s Tempest Prognosticator was a real Victorian invention that used slugs to predict oncoming storms. A creation of the Victorian era’s wild and sometimes inspired inventiveness, it never took off, though you can still see an example of it on display at Whitby Museum.