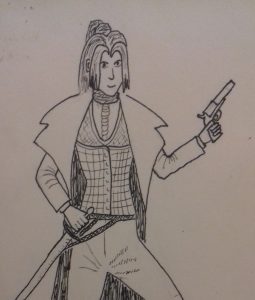 The cat had fleas like the city had people – numerous, tenacious, and irritating. I could hear the fleas on Dagger just like I could hear the people crawling across the docks above and streaming through Rubble Town hundreds of feet below. I loved the cat enough to put up with the noise of the fleas and of her scratching. Rubble Town I just avoided.

The man at the door of my office had a weak knock that didn’t match the sharp tap of his military boots on the iron walkway.

“Come in,” I shouted, loud enough to make myself wince.

The door opened to reveal a pale, rotund figure in a surprisingly well-cut bottle green jacket, its waist trimmed back to make space for a weapon belt he didn’t wear.

“Lady Talia Ravenswing?” he asked as he took the seat opposite me.

“I lost that title,” I replied.

“Ms Ravenswing, then,” he said. “My name is Umberto Pollyglog. I’m the-”

“Accountant for Foil Military Services,” I said, pointing at the badge on his jacket and the ink stains on his fingers. “Go on.”

“Your office unit is missing seventeen structural rivets,” he said, glancing around the room. “Is it stable?”

“Of course it is,” I snapped. I knew a few were missing, but seventeen? I should talk to the landlord about repairs before the whole thing fell off the side the tower.

“Then we can talk,” Pollyglog said. “My employers have a job for you.”

“That’s what employers do.”

“They want you to bring in Jan Shofflekrep.”

“He used to be a slave in the engine room of one of our airships. Punishment for debts. He escaped before completing his term. We can’t have him in the public eye. It’s a stain on our reputation.”

“I don’t work for military contractors,” I said. “They never pay on time.”

Pollyglog drew a banker’s draft from his pocket and slid it across my desk. It was clean, white, and filled out for a larger sum than I’d earned all month.

“That’s the down payment,” he said. “It triples on delivery.”

I hesitated. I could have a lot of fun with that money. But…

“Shofflekrep is based in Rubble Town,” I said. “I don’t go into Rubble Town.”

Just the thought of the place made me wince. My hearing was my greatest asset but it was also my greatest weakness. I could hear a woman creeping barefoot five hundred yards away. Put me in a place like Rubble Town, filled with the constant sound of pistons and hammering, and I’d have a headache for a month.

“We feared you might say that,” Pollyglog said. “But we also know what really happened on the Bodlingthwaite case. If you don’t cooperate, we will share that information with a Justice of the Peace.”

Furious, I leapt to my feet. Pollyglog’s eyes went wide with shock as I lifted him out of the chair, flung open the window, and swung him out by the scruff of his neck. He gasped in terror as I held him out by one arm, hundreds of feet above the mass of broken machinery and lost lives that was Rubble Town.

“Bodlingthwaite’s son was a rapist and a sadist,” I growled. “He got what was coming to him.”

“Not in the eyes of the law,” Pollyglog said, his voice steady despite the terror twitching in his eyes. “Or his father, should the truth emerge.”

“I should drop you just for mentioning that sick beast,” I said.

“If you did, I would fall eight hundred and thirty-two feet to my death,” Pollyglog said. “And my employers would still release the information.”

In that moment, I hated him. Hated the world. Hated myself for being so foolish as to threaten one tiny cog in the machine of Foil Military Services.

But most of all, I hated that someone was forcing me to do what I didn’t want. I had given up a title to avoid this. Yet here I was, facing a forced contract instead of a forced marriage.

Feeling like a traitor to myself, I hauled Pollyglog in through the window and flung him on the floor. Dagger, picking up on my mood, hissed and scratched at his cheek.

“Good kitty,” I said, tickling her under the chin.

“Your cat has fleas,” Pollyglog said.

“We like the company,” I replied. “Though it has gone downhill in the past ten minutes.”

“Here’s everything we have on Shofflekrep,” Pollyglog said, pulling an envelope from his jacket. He held it out to me, but his eyes were on the cat.

I tipped the documents onto my desk and started leafing through them. I didn’t know much about Jan Shofflekrep, but one thing was for sure – if Pollyglog’s employers hated him then he must be a decent guy.

Shame I had to help them capture him.

“When do we set out?” Pollyglog asked, wobbling a little as he hauled himself to his feet.

“One of the conditions of your employment,” he said, straightening his jacket. “We don’t want another Bodlingthwaite.”

I considered protesting, but what was the point? They had me over a barrel.

“Give me an hour,” I said, sitting back in my chair. “Then we’re heading to Rubble Town.”

And so we begin another story. Regular readers will notice that this isn’t the historical fiction I talked about last week. I’ve had to delay that, as the book release I’m tying it to has also been delayed. In the meantime, it’s time for some steampunk noire.

Next week, Ravenswing and Pollyglog head into the seedy underbelly of the city. What will they find there? Can they work together? And will the fleas come with them?

Come back in seven days to find out.