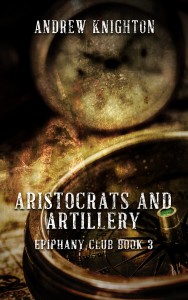 Action, adventure and betrayal in the city of love.

Adventurer Dirk Dynamo is back in Paris, in pursuit of the final clue to the location of the lost Great Library. But Paris is a city at war, with Prussian troops closing in from the east and a would-be king preparing to rise up in revolt. As violence reaches the city streets, can Dirk retrieve the last tablet, or will the path to the Great Library fall into the hands of a criminal mastermind?

The third book in my Epiphany Club steampunk adventure series, Aristocrats and Artillery is out today on Amazon and Smashwords.