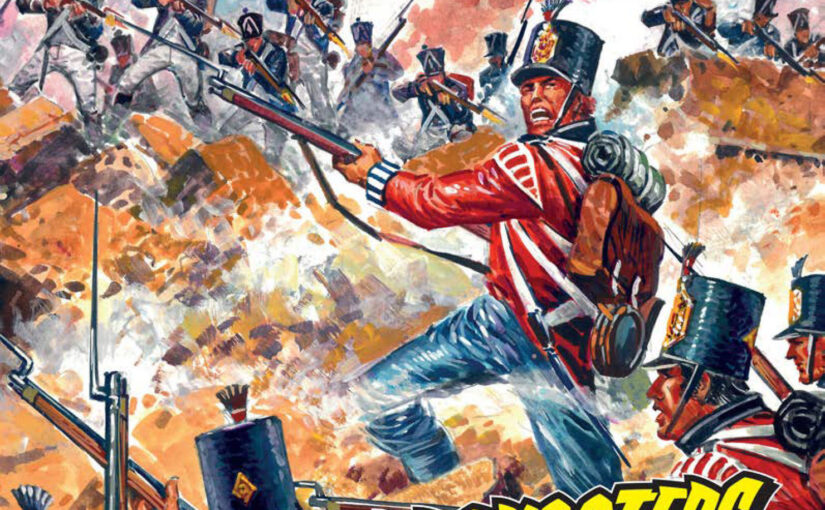 Spain, 1813. A British-led alliance is besieging San Sebastian, to liberate the town from its occupying French garrison. The bodies are piling up at the walls and there’s a traitor in the British camp, determined to destroy them from the inside. Can Tom Hopper and Samuel Jones catch the saboteur and survive the siege, or is their journey through the Peninsular War about to meet a tragic end?

I have a new Commando comic out today, returning to my favourite recurring characters – riflemen Tom and Sam and their guerrilla companion Maria.

I really enjoy writing about the Napoleonic wars. Just before war went fully industrial, they had guns but also plenty of close combat, making for varied action scenes. The campaigns are epic in scale but still have space for personal stories, especially once you throw in Spanish guerrillas fighting to free their homeland. There are tensions of class and nationality at enough distance to dodge modern politics.

This is the fourth time I’ve written these characters for Commando, though Maria’s also had a story of her own here, and I’ve got into the groove with them. Writing recurring characters gives me a stronger sense of who they are and builds on what they’ve been through before. Tom’s become more professional, Samuel has loosened up, and Maria has shown something of her darker side. Captain Haythorn is recovering from his injuries, while Colonel Jarvis is emerging as an amusingly pompous foil.

So yeah, it’s good to be back.

My favourite development in the current story is the growth of Captain Baptiste. The throw-away villain of previous stories, he becomes more sophisticated this time, as he infiltrates the British camp. His vendetta against Tom, Samuel, and Maria makes the story more personal, in a way that wouldn’t be possible without their shared history.

Sure, Baptiste still isn’t the most rounded of characters, but it’s nice to have a familiar villain. And if I get to write a fifth story, I have plans for him, a side of the captain that’s been hidden until now…

Showing the Other Side

Showing another side of war and combatants has been a big theme of this series.

Tom and Samuel both showed different sides of themselves as they grew through The Forlorn Hope.

Maria showed them another way of fighting when she appeared in V for Vitoria.

But another emotional side emerged in that story, one that grows in Sharpshooters and Saboteurs. War evokes intense feelings, shared struggle forging bonds. That can mean rivalry, friendship, or something more. Commando isn’t often a place for romance, but Samuel and Maria’s relationship is taking a turn, and I’ve had fun playing with that. It’s nice to show something sweet, if sometimes spiky, amid all the destruction.

So, This Comic Then…

If that’s whetted your appetite, then you can buy Sharpshooters and Saboteurs in newsagents, as part of a bundle through the DC Thomson online store, or as a digital edition on Comixology.