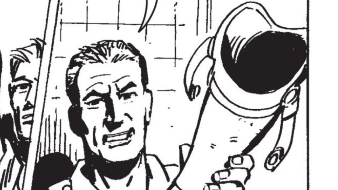 Which is my way of saying that I have a new comic out – an issue of Commando titled Splashdown in the Pacific, it’s the story of an American reconnaissance pilot who’s enjoying the quiet of the early Pacific campaign until he meets an Australian officer with a taste for adventure. When they set out on a mission to look for the Japanese fleet, things go downhill fast. There’s a dogfight, a shark attack, a jungle trek, and more.

This story was originally inspired by a photo Commando shared on their Twitter feed, showing the crew escaping from a plane that had been shot down over the ocean. That got me thinking about what that crew might encounter and especially what could make the situation worse. Pretty much everything that crossed my mind is thrown in here, from the aforementioned sharks to Japanese patrols and deadly snakes.

The early stages of the Pacific war were a tense time. After Pearl Harbor and the Japanese seizure of European colonies in the Pacific, it was clear that they were going to head south for an invasion of Australia. The Allies knew that they were coming, but not when and where.

There, as elsewhere in the war, aerial reconnaissance was vital. As Ralph Bennett explains in his book Behind the Battle, there had been a mad scramble to rebuild military intelligence services internationally due to their neglect between the wars. Aerial reconnaissance was a vital part of this work, especially in the wide expanse of the Pacific. A story about two guys taking photos wouldn’t be very exciting, but by putting them in peril, I’ve found a way to make the action centre on them.

As is often the case in war stories, the conflict doesn’t just come from facing the enemy. Being on the same side can trap people together and exacerbate their differences, creating huge tensions. It’s why Richard Sharpe is constantly arguing with the officers on his own side. Stories get dull if everybody’s working well together.

Which is where Mike Anderson comes in. Mike is one of the characters I’ve most enjoyed writing over the past year, and not just because I had fun throwing in Australian dialect. He’s confident, entertaining, and outspoken, which comes across as annoying and abrasive to someone who’s stressed out and just wants a chance to think. Can you see where this is going?

Like most Commando comics, Splashdown in the Pacific is a pulpy action adventure. But like all the best pulp adventures, it’s not the sharks and the snakes and the crashes that make it – it’s the characters and how they relate.