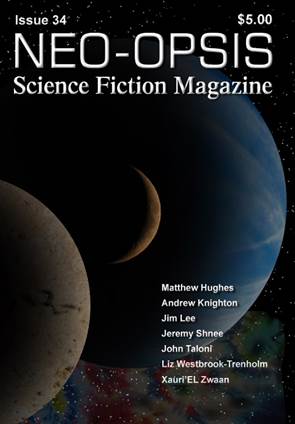 Garvey likes working with machines; unlike with humans, their behaviour makes sense. But when the remote control in his head acts up, he’s going to get a lot closer to people than he’d like…

I’ve got a new story, “The Machine Man”, out in the latest issue of Neo-Opsis. It’s a sci-fi story about a technician struggling to cope not just with the way technology is changing him, but with the turmoil of a society under strain.

This started out as an experiment in writing about psychic powers, looking for a new way they might come about. What if an attempt to control machines ended up affecting people as well? That implicitly asks uncomfortable questions about the difference between people and machines, and to some extent expresses my own outlook on that topic. But this isn’t a story about what it means to live. Rather, it’s a story about how we fit into society and what happens when you suddenly become very connected.

There’s a rich history of stories featuring psychic powers. My favourites, like Julian May’s Saga of the Exiles and some of the X-Men comics, delve deep into what would happen if we could do extraordinary things with our minds. This story is less about those extremities and more about the mundane question of how such a thing could happen. The story itself, though, is far from mundane.

If this sounds like your cup of tea, then you can find “The Machine Man” in Neo-Opsis issue 34, out now.