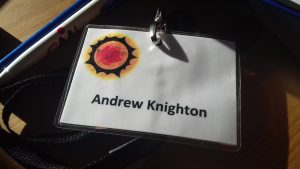 Nothing brings out the impostor syndrome in me like a convention. There I am, sitting on panels with authors I’ve heard of, making out like I have something relevant to say. Telling people that I’m a writer when they’ll never find my books in Waterstones. Seldom do I feel so much like I’m faking it.

Or at least that was the case until last weekend and FantasyCon 2017.

Two things at this convention made me feel more like I was, on some level, the real deal.

One was seeing the successes of my friends. Two people I’ve known since university had book launches. Adrian Tchaikovsky, who I’ve got to know since moving to Leeds, won the annual best fantasy novel award for The Tiger and the Wolf. Though I’ve had moments like this before, this somehow became a tipping point, the moment when “these writers are just people like me” became a solid, emotional reality instead of something I would mutter as a mantra as I hunched over my poor battered manuscripts.

The other was people’s responses to me talking about my work. I was on panels about history, ghostwriting, and steampunk. In between, I had numerous conversations in which I talked about the writing I do for a living.  And people’s responses, the way they treated me like I knew what I was talking about, the occasional impressed reaction at how many books I’ve ghostwritten over the past few years, that made me realise that what I do isn’t a sideshow. Sure, it’s not the same as what the big name authors are doing. It’s not where I want to be eventually. But it’s providing me with experience and expertise that’s actually pretty impressive. I am a writer, even a professional one. And the fact that it’s not what people dream of when they say “I’m a writer”, the reality of it is still pretty cool.