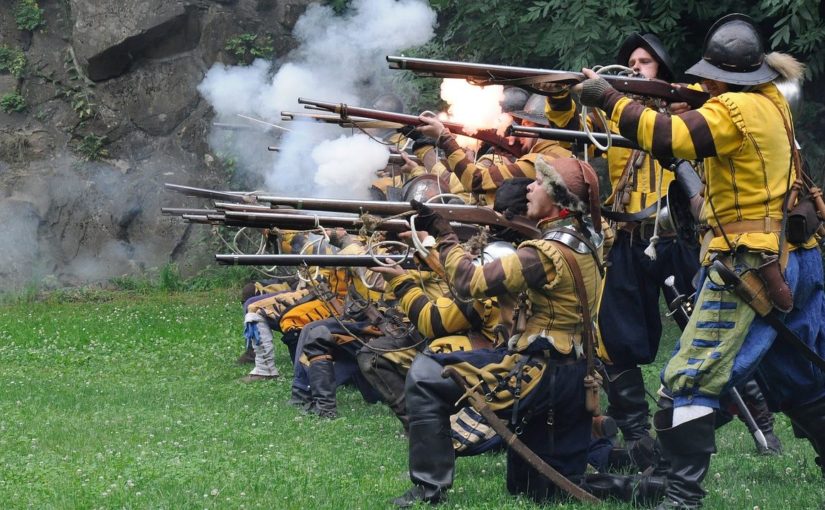 Rob raised his musket and aimed at the oncoming Roundheads. Even through the smoke drifting across the battlefield, he could smell the powder in the pan so close to his face and the match smouldering away in the lock.

Rob squeezed the trigger and closed his right eye. There was a click and a flash as the match hit the pan, then a moment later his musket barked, along with hundreds more along the line.

Rob lowered his musket and reached for his powder and shot. The first round of each battle was an orderly business, the men working in unison through the intricate dance of loading and firing. But by now they were all just going as fast as they could to get their hits in before the enemy reached them.

A man next to him fell as the Roundheads fired back, but Rob pressed on. Reloading complete, he raised his musket and took aim.

A familiar face emerged from the ranks across from him, a face all too similar to his own. His stomach lurched.

With a jerk, Rob tilted his musket up, then squeezed the trigger, firing into the sky. It was one thing to shoot the nameless men who had taken up a false cause. It was another when their rank included his own brother.

Red-faced with shame, Rob reached for his powder again, but this time he didn’t reach for the shot.

The camp was dark but not quiet. Everybody knew that they would fight again tomorrow. Despite a day of marching and shooting, the tension of that knowledge overcame their exhaustion.

Rob crept through the camp. He had left his belongings behind, pretending that he was just going for a piss. By the time anyone realised the truth, he would be long gone.

“Where are you going, Rob?”

The voice stopped him in his tracks. He turned to see the captain in his red coat.

“Wrong way for the trees. Looks to me like you’re heading towards the road.”

He let out a sigh and his whole body slumped.

“I saw Adam on the other side today,” he said.

“That’s the brother who turned puritan?”

The captain watched Rob in the dim light of the nearest campfires.

“I can’t shoot at my own brother.”

Rob nodded. He hadn’t let himself think that word, even though he knew it was true. Wretch that he was, he could at least face the consequences with dignity.

“I’ll take my punishment, whatever it is.”

“It’s a tough situation, lad, but you’ve owned your sin, now you can overcome it. Head back to camp and I’ll say no more.”

“I was deserting! I deserve to be punished.”

“You’re not deserting now, and that’s what matters to me.”

Rob trudged back to the fire and the comradeship of his unsuspecting company. Their welcoming smiles stung more than any lash.

Rob raised his musket and aimed at the oncoming Roundheads. Along the line, others did the same, ready to kill for king and country.

Rob scoured the faces across from him, looking for that familiar one. He could fire into the sky again, or choose to load powder without shot. His captain was busy with the battle line. He’d never know.

But what then for the rest of their men? What danger did he put them in by not fighting? And what of the cause he’d sworn himself to?

He took aim and tightened his grip on the trigger. He couldn’t see his brother in the front rank facing them. He would just have to hope he wasn’t in the rank behind.

I’ve been thinking a lot about the English Civil War recently. There are some features of recent politics that are disturbingly similar to the buildup to that terrible war. While I’m not running around panicking that we’re on the verge of violence, it has put the war and its dilemmas in the forefront of my mind – hence today’s story.