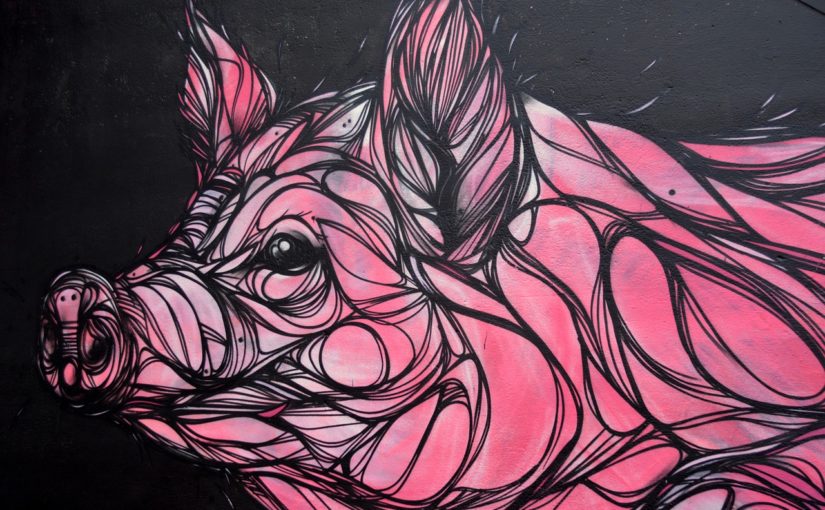 Annette’s stomach ached. It felt as though it had always ached, though she knew that wasn’t true, just as she knew that the town hadn’t always been under siege. There had been a time before there were Englishmen outside the walls, and her parents insisted that such a time would come again. But they didn’t look Annette in the eye when they said that, just like they didn’t look her in the eye when they said there would be food soon.

When Annette brought them the pig, they would look her in the eye and smile again.

No-one else knew about the pig because no-one else went into the ruined houses on the west side of town, shattered by English trebuchet stones in the first days of the siege. Annette had gone there, curious to see why the others wouldn’t, and hadn’t found the wrecked homes as disturbing as the adults did. That was why she had been the one to see the pig, skinny as it was, hiding amid the broken timbers and fallen stones. That was why she was going back now.

Clutching her mother’s knife, Annette crept back into the ruins. She had never killed anything, hadn’t even learned to butcher the family’s meat yet, but the hunger was eating at her as surely as the misery on the faces she saw around town. She wasn’t a knight who could save them all, but if she was smart and fast then maybe she could fill her family’s bellies.

Lithe as a snake, Annette slid between broken wall timbers. The pig was peering into a broken chimney breast, its back to her. She crept toward it, knife raised.

A stone rolled beneath Annette’s foot. She stumbled. The pig turned.

Annette raised the knife, but found herself frozen as she looked into the creature’s eyes.

The pig squealed and ran.

Annette darted after it. If it got into the street then other people would see it, people as desperate as her but with the strength of adults. She would lose her chance to feed her parents.

Annette abandoned the knife and dived onto the pig, wrapping both arms around it. The pig squirmed and kicked. The two of them went rolling through the dirt. Splintered wood stabbed at Annette’s back as she held on tight and let the pig roll her round.

She couldn’t hold on forever. Clinging tightly with one arm, she reached out with the other, seeking a weapon to fight the pig. A stick, a stone, her knife if she could grab it. Anything would do.

The pig squirmed free and dashed across the room. It got to the gap in the ruined wall where a door had once stood, then hesitated, looking back past Annette to the fireplace.

She grabbed a rock and stalked towards the pig. She didn’t understand why it wasn’t running, but she didn’t care. Dreams of pork stew and smiling faces made her smile in anticipation.

There was a squeal behind her, higher pitched than the pig. A pair of piglets poked their heads out of the fireplace. Their eyes were wide, their ears too big for their heads, their mouths open as they stared at her.

The mother pig looked at Annette and its ears flopped. With heavy steps, it returned to the fireplace and stood between its children and the hungry human.

Annette looked at them. All three animals were so skinny that their bones showed, just like hers did. There was barely a strip of meat on them, but any meat was better than none.

She shuffled her feet and gazed down at the knife. She didn’t feel so hungry anymore.

With a sigh, she hid the knife away in her sleeve.

“They say the siege will be over soon,” she whispered. “But if not, I’m coming back for you.”

She crept out of the ruins, watching carefully to be sure she wasn’t observed. As she walked home, she thought about the cute little piglets, with their shiny eyes and their big ears, and their mother looking after them. That thought made her smile. The hunger didn’t hurt as much and the dread of her parents’ grim expressions faded. The might not look her in the eye when they talked of the siege, but no matter what happened, they would always be there.