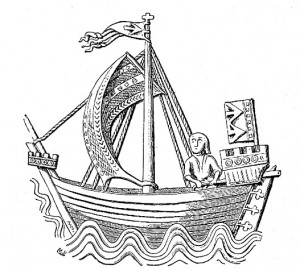 I hated every year my father made me accompany our stock from the Bordeaux vineyards to the London markets. But 1321, when we sailed late and so missed the protection of the wine fleet, that was the worst.

My stomach lurched and I prayed to all the saints for salvation as I watched the land passing far to starboard. Even sailors do not like to lose sight of land, for to do so makes navigation near impossible. To me it was even more precious – a reminder that this sickness would end. And so, as I heaved my guts over the side and watched the distant cliffs with a fond eye, I was the last to see the menace bearing down on us.

“Master Robert,” Captain William said. “There is a problem.”

I had made this voyage with him ten times and never heard him so tense. Following the line of his pointing finger, I saw a ship ahead of us, a red flag flying from its mast.

“Tis John Crabb,” the captain said. “The Flemish pirate. If he catches us…”

He shuddered and made the sign of the cross.

“Then turn.” I wiped the bile from my chin, even as fear threatened to unleash a new load. “In God’s name, turn and flee for safe harbour.”

“I hoped you’d say that, Master Robert.” The captain waved, his men hauled on a dozen mysterious ropes, and we came about.

The wind was against us now, but against the pirates too. We slowed, yet for some time I thought we were gaining distance on them.

I was wrong. Soon that dread flag above the dark sail grew twice as large to stern. To port, cliffs and rocky coastline continued to menace us, with no sign of a friendly harbour in which we might hide.

I could hear men praying as the rudder turned, the whole ship creaked and the land disappeared behind us. Others sharpened their weapons, and I joined them, grinding a whetstone along my sword, knowing that against Crabb and his men my small skill would buy me mere minutes more life.

Captain William sat down beside me.

The men around us stiffened and stared past the aft castle with eyes full of dread.

“Then sail towards them,” I said.

The men looked at me with shock, William among them. But I had no other plan, and nor did they. Sometimes a season comes when only one kind of grape survives the harvest. Then we gamble all on the wine it makes, for what other choice is there?

“The wind will be with us and we will gain speed,” I said. “I understand that much about sailing. If we can pass them while they are still heading this way then we will be the faster vessel. Perhaps that will give us time to reach a port to the north.”

I considered saying something heroic, holding up my blade and declaring that if all else failed at least we would die well. But that thought was no comfort to me, and I doubted it meant much to these sailors either.

After a moment’s consideration, the captain nodded to his men. Reluctantly they went to the ropes while he handled the rudder. Our little round ship turned once more, and her sails filled. Foam broke against the bow as we hurtled ever faster towards our doom.

Soon Crabb’s ship was less than half a mile away, then only a few hundred yards. Arrows clattered on our deck and thudded into the sides. I ducked for safety while our brave captain stood upright at the rudder, keeping us on course.

As we drew level I could see the leering faces of the pirate crew. Perhaps it was just my fear-infused mind, but I swear they had the teeth and horns of devils and cried out with the voices of the damned. If these were Flemings, I thought, then the Low Countries must be a terrible place.

They hurled ropes, metal hooks catching in our gunwale. I raced over, sword in hand, other men beside me, and our attackers raised their arms to fight. But instead of standing ready to receive borders we hacked desperately at the ropes. Arrows rained down around us and splinters flew from misplaced blows, until the tattered cords gave way with a series of sharp snaps.

It was only then, as the pirate ship turned sluggishly behind us and we raced away on a following wind, that I noticed the pain in my thigh. I looked down to see an arrow protruding there, and blood seeping through the hem of my tunic.

Pain overwhelmed me and I blacked out. When I awoke I was lying on a pile of blankets, my bare leg wrapped in bandages. Captain William was looking down at me.

I smiled with relief. But I was waking up, and now I noticed the uncertainty in his expression.

“There’s another ship ahead,” he replied. “Can’t tell yet if it’s friend or foe.”

Wincing, I eased myself upright and looked around for my sword.

Did I not tell you that was the worst year?

As part of writing ‘Honour Among Thieves‘, I read The Time Traveller’s Guide to Medieval England by Ian Mortimer. It’s a well-written guide to everyday life in 14th century England, which I’d recommend to anyone with an interest in that period. This story was inspired by the chapter on travelling, which described just how terrifying a sea voyage was for many people, as well as mentioning real life pirate John Crabb. I like to think that our protagonist raised a cup of wine in celebration when Crabb was finally captured in 1332.

If you’d like to receive more stories like this direct to your inbox every Friday, along with a free copy of one of my books, then please sign up for my mailing list – I promise a journey to other worlds that’s mostly safe from pirates.