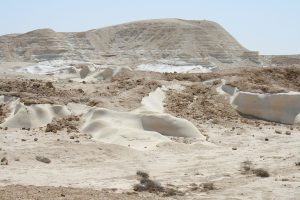 To Ellis’s relief, the rain had cleared as the sun came up. Dark banks of cloud still rolled over the windswept moors, but they were thinning as they headed toward the sea.

Grumbling to himself every step of the way, Ellis pushed a rickety wooden barrow full of salt up the ridge line. He would have rather spent time at the plow or milking his cows, but both law and tradition were clear. After the rains, locals must re-lay the ward.

Ellis hated the ward. Not just for the work of maintaining it and the poor recompense sent by the crown. It was the way it poisoned the soil, salt soaking in with every rainfall, creating a stretch of land where nothing could live and no man could farm.
Such a waste.

At the top of the ridge he stopped, took out his shovel, and started filling gaps in the thick line of salt that was the ward.

A spirit approached from the other side. It didn’t even try to hide its nature. Though it was shaped like a woman, its body was the stuff of a fetid pond, all algae, thick weed, and dirty water. Its only clothing was wooden sandals.

“Neighbour, will you leave a gap that I might get through?” the spirit asked. “I have business on the other side.”

“I’m sure you do,” Ellis said, hurrying to fill nearby gaps. “Business stealing souls, no doubt.”

“You don’t really believe that, do you?” the spirit asked, its voice dancing like a spring brook. “I’m no more a soul stealer than you are. I just want to get across to trade my wares.”

It held up a sack and opened the mouth to reveal wild herbs, things that could heal injuries and preserve meat, plants that seldom grew on Ellis’s land. Things he needed.

For a moment, he hesitated.

“I know your game,” he said, reluctantly returning to laying salt. “You’re trying to tempt me. But letting you through will only lead to hurt.”

“As opposed to this?” the spirit asked, pointing at the ward. “Poisoning your own land on the orders of people you’ve never met?”

“Why would they have me do it if there weren’t danger?” Ellis asked.

“Danger to them, not you. The conflict between our rulers goes back centuries. I could tell you about it if you like, though not until I’ve traded my herbs.”

Ellis moved on to the next gap. None of the breaches in the ward were large enough for the spirit to cross, but if they grew it would be another matter.

Assuming he wanted to stop her. Which he was almost sure he did.

“Please,” the spirit said, lips trembling. “My name is Onina. I have a daughter. She is sick and needs medicine that does not grow on this side. I must get through to trade.”

Ellis paused. He thought of his own Kara, playing with her straw dolls in the farmhouse kitchen.

There was no-one else to see what he was doing. Still, instinct made him step close to the barrier and to Onina, speaking in a secretive tone.

“How old is your daughter?” he asked.

Onina took a step closer, almost touching the barrier. Her rippling green flesh shrivelled a little at the closeness of the salt and she winced.

“Six years old,” she said. “Our children grow slower than yours, making them vulnerable for longer. It is as if she were a three-year-old human, burning with a terrible fever.”

Ellis remembered the winter Kara had fallen sick, her little face screwed up in misery as she shivered and coughed. If not for the berries her grandmother had found she would have died.

“If I let you through, you’ve got to promise to be back within a day,” he said. “I can disguise you in some of my wife’s clothes.”

“Thank you,” Onina said, leaning her face closer through a small hole in the ward. “Just leave a gap, and I will be gone as soon as I am done.”

“Someone might see that.” Ellis shook his head. “I’ll close it, then when you’re done I can make a gap again.”

Onina shot out her hand, grabbing Ellis’s wrist. He fell in the salt, startled and bewildered, and she shoved him back and forth on the cold ground.

A dozen more spirits appeared from hiding places across the countryside behind her.

Horror grabbed Ellis. She was using him to break the barrier, his body scattering salt as he was shoved back and forth. The spirits would pour through. Who knew what they would do.

He struggled, but Onina was twice as strong as him and he could not break free. He could not reach his shovel or the salt in the barrow. He did not dare grab any from the already weakened ward.

The spirits rushed towards them.

Onina shoved his face in the mud. Even that tasted of salt. The bitter flavour of his poisoned farmland.

Poisoned to her as well as him.

Grabbing a handful of mud, Ellis flung it in Onina’s face. Green flesh shrivelled at the salt’s touch. She flung her hands up, letting him go.

He leapt to his feet, grabbed his shovel from the barrow and swung it wildly. Salt sprayed through the air and the spirits jerked back mere feet from the gap. Another shovelful and the gap was too small to pass through. Two more and it was gone.

The spirits glared and screeched at Ellis. Onina’s placid face became an ugly mess of teeth and hatred. But no more ugly than Ellis’s thoughts about her trickery and betrayal.

Pushing his wheelbarrow ahead of him, he went eagerly to repair the rest of the ward.

This story was inspired by R J Barker’s workshop on landscape and writing at Sledge Lit 2016. I left the workshop with a photo of a landscape crossed by a white barrier (snow, but it looked like it could be salt) and this is what it inspired. R J Barker’s first novel is coming out later this year, and if it has half the energy and inspiration of his workshop then it’ll be well worth a read.