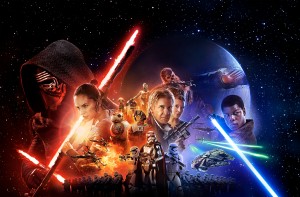 They may not be the most innovative of stories, but for me the Star Wars films have gained huge value. I realised it when I bought The Force Awakens on DVD. The woman behind the counter wasn’t a huge fan, but we chatted about how her husband watched it twice in a row. When I tweeted as I re-watched the film, I quickly got quick responses from people I know, ranging from discussing favourite lines to asking my thoughts on the up coming Rogue One film.

There’s something similar with Star Wars games. When I bought Star Wars Battlefront for my PS4, the woman behind the counter talked about her love of it and her excitement at playing well-known characters. I went to play the X-Wing miniatures game at a games store in London recently, and the moment we put x-wing models on the table, everyone present, both friends and passing gamers, had something in common. X-Wing has been a real boon to my social circle, a game and setting lots of us love, which makes a fun talking point, and which draws other geeks in.

I get excited about Star Wars because of associations I have from childhood. But its huge popularity brings another emotional benefit. Wherever I go, it gives me something to talk about with people. It’s a way to connect, to carefully test the boundaries of new people’s geekery, to find out how much we have in common. Because the massive power of such works might not be good for cultural diversity, but it’s great for connecting people together.