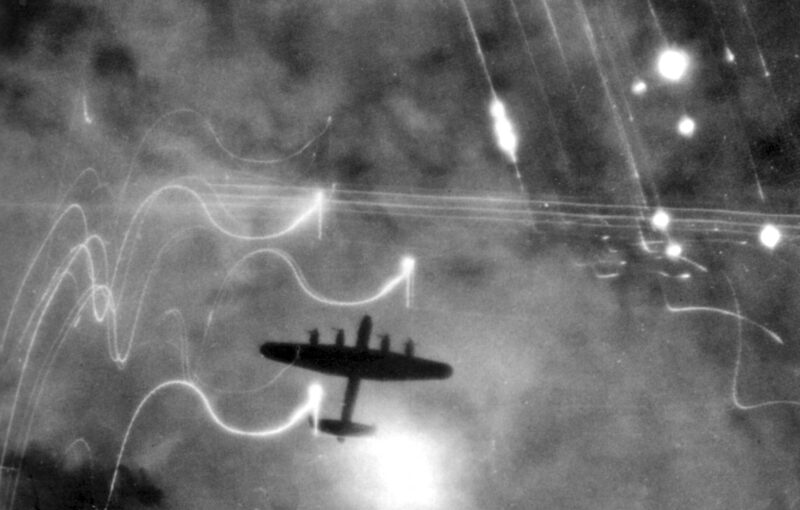 “Where’s father?” Ursula had to shout to be heard over the air raid sirens and the crash of the first bombs falling on the city. The sound of British planes was a distant third in the maelstrom of noise blasting her eardrums as she stood frozen on the steps down into the cellar.

Her mother’s eyes were already wide with terror, but now her skin went ghostly pale.

She pressed her face against little Werner’s head, and he gripped her tight, crying at the noise and the confusion and the fact that his mother was scared again. A neighbour wrapped her arms around them both, but the crying only grew louder.

Ursula was almost in tears too as she imagined her father hobbling through the city, trying to out-run the bombs with his cane and his crippled leg.

Her mother’s scream was a hook in her chest, but she accepted the pain and ripped herself free, running out of the building and into the road.

Moonlight and searchlights combined to cast disjointed shadows that shredded the shapes of streets, creating a world of jagged angles and sharp, broken surfaces, as if the impossible geometries of nightmare had spilled out into the heart of Germany. But Ursula had lived in these streets for fifteen years. She knew the reality behind the illusion. Even as her eyes tried to make sense of the chaos, her feet carried her across the cobbles, dashing down roads and alleyways to her father’s office.

The bombs fell like the footsteps of an angry giant, crushing buildings as the raiders crossed the city. The percussive booms grew closer with each moment, while the sirens howled like wounded beasts and the stutter of machine gun fire stabbed through the engine growls above. By the time Ursula reached her father’s office, she could feel each quaking impact in her guts. Flames had taken hold two streets over, adding their infernal glow to the hellscape she ran through.

Her father stood in the doorway of his office, staring up at the sky. With one hand he clutched his walking stick, while the other clung to the door frame. Behind him stood Herr Schwartz, his faced drained of self-importance as he hugged a bundle of ledgers to his chest.

“Father, we need to get to the shelter!”

“Ursula, what are you doing? It’s not safe in the streets!”

He came with her, leaning on her shoulder. They moved as fast as they could, faster than he ever could have managed on his own, but it still felt terribly slow. They were the turtle in this race, and the hare had been replaced by a clawed and feral wolf.

“Come on, Herr Schwartz,” father called back over his shoulder. “Don’t go down with your building.”

Schwartz stared fearfully after them.

“Quickly!” father shouted as they reached the end of the street.

Schwartz took a reluctant step out of the doorway, then another.

Incendiaries hit, a string of them falling down the length of the building, blooms of fire unfurling, igniting the oil store for the heating system. Flames burst forth then drew back, sucking the air in with them. Papers flew from Schwartz’s fingers before he was caught by a blast from the doorway and fell, burning and screaming.

“We must go back,” father said.

“No! It’s too late.” Ursula dragged him after her. Schwartz’s harrowing cries faded as they hurried away. Tears streamed from her eyes, but she wouldn’t go back. She couldn’t risk her father.

A dog dragged itself out of an alleyway, blood streaming from its shattered back legs. Down a street a woman ran, shrieking and clutching her head. A building crashed down, filling the street with dust and debris, but miraculously nothing touched Ursula or her father.

At last, they reached the apartment building. She opened the cellar door and ushered him in. As she turned to close the door, an unexpected quiet fell. She hadn’t noticed the bomb blasts and the engines receding, but they were gone, leaving only the ringing in her ears. Was that it? Were they safe at last?

No. It was a cruel joke, a mocking imitation of peace. Even if the British were done for the night, the Americans would come in daylight. There was no moment when her broken world reassembled itself, when the pieces made sense.

Ursula closed the door and followed her father down into an imitation of safety.

I have a new Commando comic out this week, showing the bombing campaigns of World War Two from the perspective of a British aircrew. It seemed like a good time to show the other side of that experience.

I’m not going to take a “well actually, both sides…” approach to that war. The far-right regimes of 1930s Europe were monstrous and had to be stopped. It is also true that the Allies did some monstrous things to stop them, channelling the courage and skill of individual servicemen into inexcusable attacks on civilians. That courage and those atrocities existed in the same moment, and acknowledging their co-existence is one of the most difficult things history forces upon us.