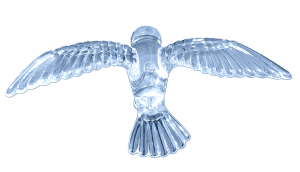 The bird fluttered in Laula’s hand, intricate wings of crystal glass beating against her fingers. Every time she looked at it, at the tiny gears and silver spindles that drove this creation, she felt her breath snatched away at the beauty. It was like a stunning gem sitting in her palm.

As she strode along the forest path, boots kicking up the first fallen leaves of autumn, she saw another of the birds soar past overhead. She was getting close now, she was sure. Her heart hammered with excitement at the thought of finding out where they came from. For this, she was willing to leave the city and all its riches behind.

It helped that she was still wanted for taking those riches and had come so close to being bound in chains.

The track opened up into a clearing. Ahead of her was a tower, its walls covered with the winding pulleys and hissing pistons that marked out a building made by a master machinist. Normally, she climbed them only for purposes of theft, leaping nimbly from one gear to the next, using her hands to hang from levers and fan belts. Today she could spare only one hand, the other carefully cradling the crystal bird in such a way that it was neither crushed nor free to escape. At least there was no-one around to stop her ascent.

Carefully drawing the belt from her tunic, she used it as a whip to grab hold of a fan belt above her head. That carried her close enough to drop onto a rising piston a foot across. At the top of its movement she leapt onto a huge gearwheel, let it carry her around in a great arc, and lunged through the only window she had seen, throwing herself shoulder first at the floor and curling up around the bird, keeping it safe.

As she started to rise, the point of a boot collided with her side. She gasped, more from shock than the impact, and rolled clear as another kick swung past.

“What are you doing here?” snapped a short woman with frizzy blonde hair, tools jangling in her leather apron.

“Looking for these,” Laula replied. “Do they come from here?”

The woman snorted and took a step back, folding her arms.

“Go away,” she said, her eyes locked on the bird.

Laula pushed herself to her feet. She gave an exaggerated wince at the pain in her ribs, but there was no flicker of sympathy in the woman’s expression. Still, something about her intrigued Laula. Not just the tools or the clever spark in her eye, but the way she carried herself – certain and yet a little fearful.

“Who are you?” Laula asked.

“Someone who wants you to go away,” the woman replied. She took a step to the left, just too late to stop Laula seeing the rows of crystal birds laid out on a workbench behind her, their wings and gears in various states of production.

“Go,” the woman said again, glaring. Something glittered at the corner of her eye. She looked so stern, yet Laula might almost have thought that she was about to cry.

She followed the woman’s gaze down to the bird, its wings still fluttering against the confinement of Laula’s hand. Suddenly Laula saw where that pain came from, where the obstinacy came from – this beautiful creation, the woman’s work, trapped. Laula had never had any taste for cells, and now she was one.

She reached out toward the window and then unfurled her fingers. The bird stretched its wings, rolled its head, and fluttered out into the sunlight, gears softly whirring.

Laula looked back. The woman’s smile was almost as beautiful as her birds.

“My name is Clarro,” she said. “If you promise not to touch them, I can show you the rest.”

Laula’s heart skipped a beat, and for once it was not about wealth.

This story was inspired by a souvenir my dad brought back from his travels around the world – he’s like the Phileas Fogg of our family, always off to somewhere new.