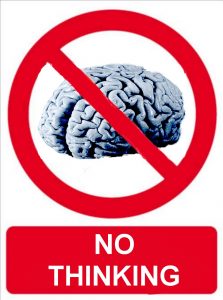 I could go to great lengths here picking apart what we mean when we say intelligence. But this isn’t that blog, and fortunately I don’t need to. Because what I’m about to say applies as much to being educated and informed as it does to having the skills to use that information.

As a result, every writer has to write people who are in some way smarter than them. It’s just that sometimes this is really noticeable. Most of us can’t think like NASA scientists, never mind write like them.

So how do you write really smart people?

First up, make use of technical language and special ways of speaking.
If you can pick out a few pieces of jargon or ways of talking appropriate to your character, you can make a good bluff of writing their voice. Those few bits will sell their intelligence and knowledgeability, making it seem like they know a lot about something you don’t.
Secondly, use point of view.
Say the story is following John, who shovels shit for a living and can just about count to twenty-one if he’s naked. He meets Anna, a NASA scientist. She starts talking science. And you write something like… “John tried to follow what Anna was saying, but the words kept sliding off his brain. Velocity this and orbital that, words no-one needed in an order that made no damn sense. As she kept talking, he started wandering around the lab…” And so on. Because your PoV character doesn’t understand the smart person, you can get away with not understanding them either. It’s just part of a convincing viewpoint.
If you’re not a NASA scientist, or hugely smart and dedicated to research like Kim Stanley Robinson, then you’ll always struggle to tell a story convincingly from the point of view of a NASA scientist. But flip the viewpoint, throw in a few bits of jargon, and you can get away with a lot.
After all, this is writing. We’re always making it up.
0 shares