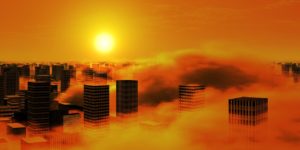 That summer, the city planners set up giant fans on the rooftops east of Grand Street. Vast sails of painted steel spun through the air, powered by the same sunlight as the heatwave. It was an insane solution, using a broken environment to mitigate its own worst symptoms. But those were the times we lived in.

Using a rope and grappling hook, I climbed the last dozen feet from the fire escape to the rooftop. I felt dizzy just looking at the buildings around me, never mind at the ground far below. But I had to get up there. The heat in the city was melting my brain. I couldn’t get any work done, and soon I wouldn’t be able to pay my bills. Like ninety percent of people in the city, I couldn’t afford air conditioning, but up here there was an alternative.

This close, the wind from the fan was almost enough to knock me off my feet. Its cooling effect was glorious. I sat cross-legged beneath it, pulled out my laptop, and started typing.

For the first time in weeks, the words flowed.

I turned at the voice. A uniformed security guard stood at top of a stairwell, glaring at me. She waved a taser.

“Too dangerous,” she said. “These fans could blow you right off the edge. Even the birds have flown away.”

Now that she said it, the absence became obvious. Most city rooftops were covered with pigeons, but not this one.

“Not on the city’s insurance.” She took my shoulder and started dragging me toward the door.

I didn’t struggle. She was stronger than me and she had a taser.

In the elevator to the ground, we talked about the weather and the state of the city. But inside, I was planning my return.

The second time, I took a different route up to the roof, using pitons as well as rope. At the top, I paused for a moment to enjoy the glorious blast of the fan, then settled down to work.

Ten minutes later, the security guard was back.

“Please,” I said, hands clasped beseechingly. “I’ve got more done in the past ten minutes than in the whole of the past week. I need this place.”

“These fans get surges sometimes,” she said. “Like sudden violent gusts of wind. You want to be blown off the edge?”

“Even the pigeons aren’t that dumb, and they could fly if they got blown off. All you’ll do is make a stain on the sidewalk, and that seems like a waste.”

“I could make you.” She raised her taser.

“You’d really do that?” I blurted out.

She looked me up and down.

I put my laptop away and trudged to the stairwell.

This elevator ride, we talked about books and TV. It turned out she was a Chandler fan too, just not a fan of trespassers on her rooftop.

The third climb was the toughest. I planned it out carefully, based on where I’d seen security cameras. If I could avoid them then maybe the guard wouldn’t know that I was there.

At first, it seemed to work. I settled down with my laptop on my knees and started typing.

I’d been at it for an hour, the air blowing past me in glorious cooling gusts, when something caught my eye. A seagull was soaring on the artificial wind, a hundred miles from the sea yet somehow here, showing off as it swept through the air currents.

I looked up to see the security guard. Despite myself, I smiled. She was getting to be a familiar face.

“Spotted me on your cameras at last, huh?” I asked.

“Something like that.” She nodded toward the stairs. “Come on, trouble.”

I sighed, put my laptop in my bag, and rose to my feet.

“Enjoy it while it lasts!” I shouted to the gull. “She’ll chase you away soon too.”

“Holy crap,” she said. “Didn’t think the birds could cope up here.”

She hesitated, then sat down, took off her cap, and wiped the sweat from her brow.

“Screw it,” she said. “It’s too hot in that building anyway.”

“Don’t we need to…?” I pointed toward the door.

“What about the risk? Getting blown off the roof?”

“Just stay back from the edge. And if I look like I’m going, you grab hold of me, you hear?”

I nodded and sat down next to her.

We sat chatting, enjoying the cool breeze and watching the seagull soar. Work could wait.

It’s been insanely hot in Britain this summer. I haven’t climbed on any rooftops to get away from it yet, but it would be tempting.