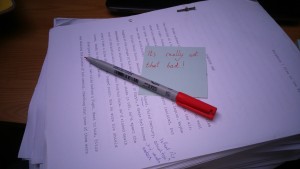 Second drafts are the most reviled part of the writing process. Having poured your heart into your story, you open it up and find that your beautiful creation has been replaced by a hideous mess of rushed sentences, incomplete plots and grammatical errors.

Spirits sinking, you set aside the red pen and go looking for an excuse not to continue. At worst, you set your precious story aside and never touch it again. At best, you begin a slow, terrible slog through this mess you’ve made.

But it’s OK, it doesn’t have to be this way. And so, at the request of Popverse writer Megan Leigh, here are my top tips for surviving the second draft.

It Happens to Everyone

The one thought that should get any writer through is a simple one – this happens to everyone.

I write for a living, and my first drafts are relatively clean. But I still find all sorts of crap when I start editing.

I’m currently going through edits on a short story for a magazine. In the final scene there are two ships, and everyone’s on them. Even with just two ships I’d managed to mix up who was on which, and not to make the scene clear to readers. That’s only one of a bunch of errors that had survived my second draft, never mind the ones I found. They don’t mean it’s a terrible story, or that I’m a terrible writer. They’re just part of the process.

Even the big names face this. Listen to Writing Excuses talking about editing and you’ll hear fantasy giant Brandon Sanderson discussing the stuff he has to fix.

We are all in this together.

Finding errors isn’t just a sad necessity. It’s a good sign. If you read that first draft and it seems perfect then you haven’t learned anything while writing it. Finding things you don’t like is a sign that you’ve improved, and worked out better ways of writing since that draft.

One Step at a Time

As with any project, if you try to deal with everything at once you will go insane. There’s just no end in sight.

So break that second draft down. Deal with a chapter at a time. Tick each one off on your list as you do it. Pat yourself on the back for each achievement. Maybe give yourself a reward for each one you complete, or every three, or whatever suits you. I use Habitica for a to-do list that reinforces achievements, and reward myself with trips out for coffee and Lego sets. But if what you need is a big bottle of whiskey and a to-do list hastily scrawled on the back of the receipt then you do that.

Maybe don’t give yourself whiskey while editing though.

I have a note stuck to my writing desk. It says “Daydream about the rewards for all this…”, and that note helps keep me sane.

Sure, it sounds like something off one of those twee motivational posters. But there’s a reason those posters became popular, and why people somehow still display them without irony. Sometimes you need a sincere and positive sentiment to get you through.

A second draft isn’t a fun process, but think about where it’s taking you. Let yourself stop and daydream for a few minutes about the completed book you’ll have at the end. About being paid to write or seeing your book in Waterstones or whatever motivates you. Picture yourself receiving your Hugo from J K Rowling while the zombie of J R R Tolkien applauds from the front row, if that helps.

Dream big, and remember that’s what all this editing is for.

If a few minutes of daydreaming don’t get you motivated again then follow the other note on my desk – “Writing becoming drudgery? Do something else for a bit.”

You write because you enjoy it, or because of the satisfaction you gain from it. You should get positive feelings from the process of editing, on some level at least. Whether you take pleasure in good grammar, enjoy writing descriptions or like the company of your characters, remember those feelings. And when you can’t find them, step away for ten minutes. Refresh your brain rather than grinding at your writing until you hate it. Because if you spend your whole time taking long breaks then you’ll never get the draft finished, but if you come to hate it then you’ll never finish it either.

So there you go – my tips for getting through a second draft. I hope they’re helpful to someone.

And if you have tips of your own, please share them in the comments – help me find new ways to do this better.

Thanks to Megan for making think about this. Turns out I had more to say than I expected.