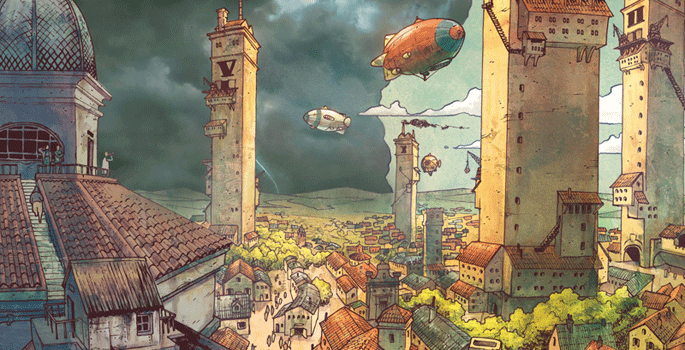 What am I talking about? Everybody likes airships.

But if you really like airships, or you like airships and you like comics, then you should check out Skies of Fire. It’s a dieselpunk adventure about a hunt for airship pirates in a world that looks like Europe circa 1920. There’s action, adventure, and wonderfully detailed images of cities, people, and flying machines. It’s one of those comics where I love getting lost in the world.

I stumbled across Skies of Fire at the Thought Bubble festival in Leeds. There are only three issues out so far, but I’m hoping for far more. And in the meantime, just look at that lovely cityscape and those shiny, shiny airships.

Because everyone loves airships.

You like airships, right? And everybody likes pirates.* So what could be better than a whole collection of stories about airship pirates?

Nothing. Except maybe if I had a story in that collection. Oh wait, I do!

Coming out at the end of February, Avast, Ye Airships! is an anthology of stories about airships, pirates and of course airship pirates. It features the latest adventure from Dirk Dynamo and Sir Timothy Blaze-Simms, the heroes of my Epiphany Club stories, as they tackle a flying slaver in the skies above the Atlantic. With only their wits, their fists and a pedal-powered flying machine, can these brave adventurers end this aerial menace?

Other authors in this collection include:

I’m really looking forward to this collection, and will share more details nearer the time. Hopefully by then I’ll also have some more Epiphany Club-related news, but that’s dependent on me finding editing time, so don’t hold your breath.

* Not the real ones who terrorise the Indian Ocean with assault rifles. The ones with parrots and dubloons.