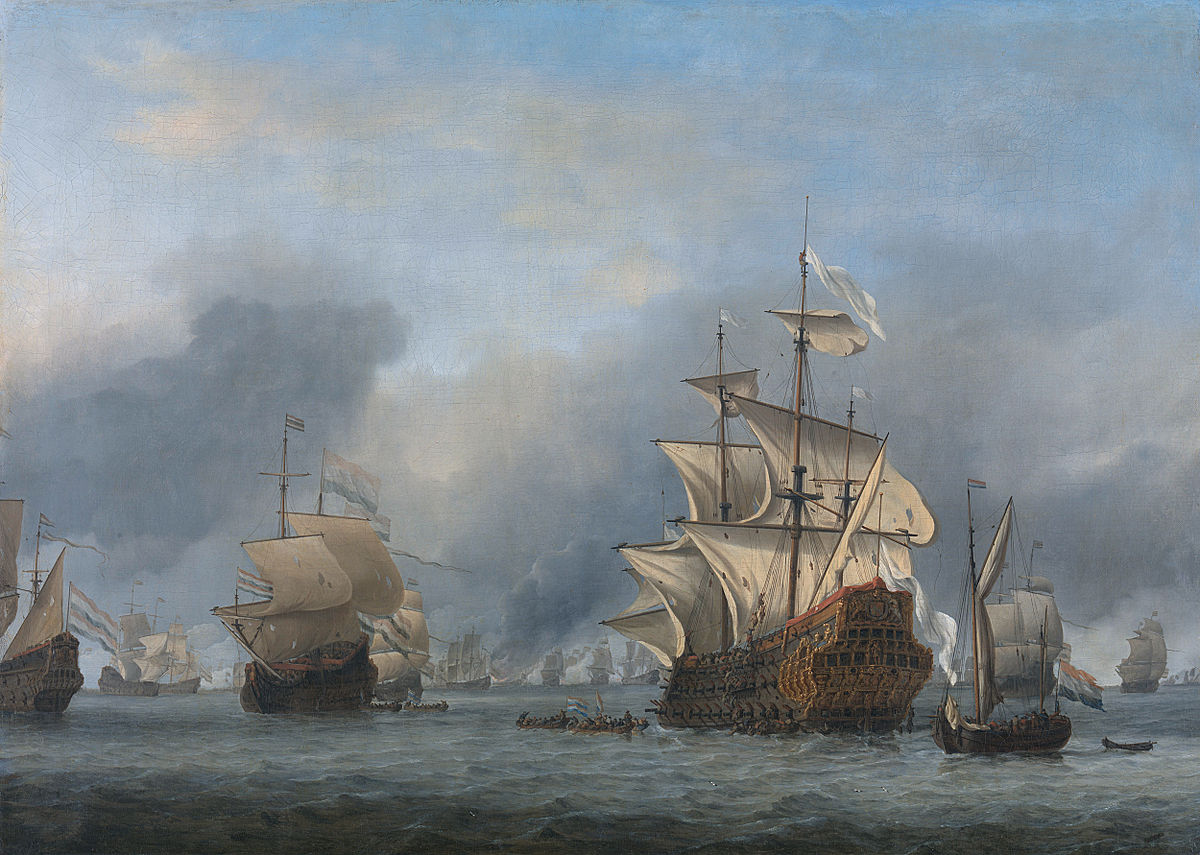 “Master van de Velde!” I exclaimed as the artist walked up the gangplank. “How good to see you. Out sketching ships again?”

“Oh yes!” Willem van de Velde said, setting down a bag of paper and pencils. He pulled out a pouch of coins and passed it to me. “I wish to set out immediately. Will this suffice?”

I opened the bag, peered at its mix of gold and silver, and felt its weight.

“It certainly will,” I said, then raised my voice to reach the crew. “Boys, get ready to cast off!”

The younger Willem van de Velde appeared behind his father, just before the gangplank was stowed away. Then we unfurled the single sail of my little galliot and headed out, threading our way through the maze of merchantmen that crowded the docks of the Hague, their timbers creaking and rigging whistling in the wind.

“West,” van de Velde said, a strange twinkle in his eyes. “Towards England.”

“Isn’t that where the fleet went?” I asked, breaking into a sweat despite the wind. “To fight the English?”

“That’s why we’re going there,” van de Velde the Younger said. “To turn war into art, retrieve beauty from horror, and capture a moment of great patriotic pride.”

“Which men will pay dearly to hang on their walls,” his father said.

“We usually avoid battles.” I twisted my cap nervously in my hands. “On account of all the killing and sinking. I think you’d better find another ship.”

“Really?” van de Velde the elder said, tossing me another bag of coins.

“Patriotic pride, you say?” With that weight in my hand, ambition overcame fear. “Then it’s our duty as Dutchmen to help you.”

By the time we got near the battle, my ambition was sinking beneath the weight of my nerves.

The sea was thick with ships, great men-of-war with full sails and bristling gun decks. They edged towards each other in long columns, smoke billowing around them, cannons roaring. The smallest could have contained my poor boat a dozen times over.

“Surely this is near enough,” I said, watching war unfold before me.

The mainmast of the nearest ship shook, then toppled slowly over, hitting the deck with a crash. The screams of mangled sailors were far too loud across the open water.

“We must get closer,” van de Velde the elder said. He sketched as he spoke, leaning on a board that rested on the rail, pencil flying back and forth across the page.

“They’ll be shooting at each other, not us,” the younger said, adding a dab of watercolour to his own work. “We need to get in with the fleet, before and behind the ships, to see the timbers splinter and flames roar, to capture the giddy heart of battle.”

“I’m not sure that my heart can take-”

Another bag of coins landed at my feet.

“Well, when you put it like that.” I raised my voice. “Boys, we’re getting in close!”

Months later, I sat in a dockside tavern, sipping at a cup of warm ale. This stuff didn’t taste as good as it used to, but then, nothing did. The days seemed greyer, the songs less lively. Perhaps if I had been sleeping better, that might have changed, but I woke in the night dreaming of the cannons’ roar and the van de Veldes’ sketches.

An old shipmate came to sit with me.

“Did you hear?” he said. “There’s been more trouble at sea. Fleet’s heading out to give the English a bloody nose.”

My heart raced. I smelled gun smoke and heard the crack of shattering timbers.

“Excuse me,” I said, downing my beer and abandoning my seat. “I have business to attend.”

I ran down to the docks. Sure enough, there were the van de Veldes, bags in hand, eyeing up fast vessels.

“Captain!” van de Velde the Elder said. “I thought that you were, in your words, done with our madness.”

There was a strange twinkle in his eyes again. I recognised it now, having seen it in my own reflection. He too heard the battle rage around him and felt his heart hammer at the thrill of it.

“I was over hasty,” I said, leading them towards my galliot. “In these troubled times, an honest sailor cannot afford to turn down business.”

“I understand,” van de Velde the Elder said, nodding solemnly. He handed me a bag of coins. “Here. I wish to sail west.”

This is one of those stories where the real history was so wild that I didn’t need to make it up. Willem van de Velde the Elder and Younger were 17th century Dutch artists who specialised in nautical scenes. During the Anglo-Dutch wars, they would sail with the fleet to make sketches of the battles, getting right in amid the action. These sketches became the basis for grand, dramatic paintings that celebrated the achievements of the Dutch fleet. They later emigrated to England, where they were employed by King Charles II.

If you enjoyed this story then you might want to sign up for my mailing list. You’ll get free flash fiction straight to your inbox every week, as well as updates on my other releases. And you can read more historical fiction and alternate history in my collection From a Foreign Shore, only 99c in all e-book formats.