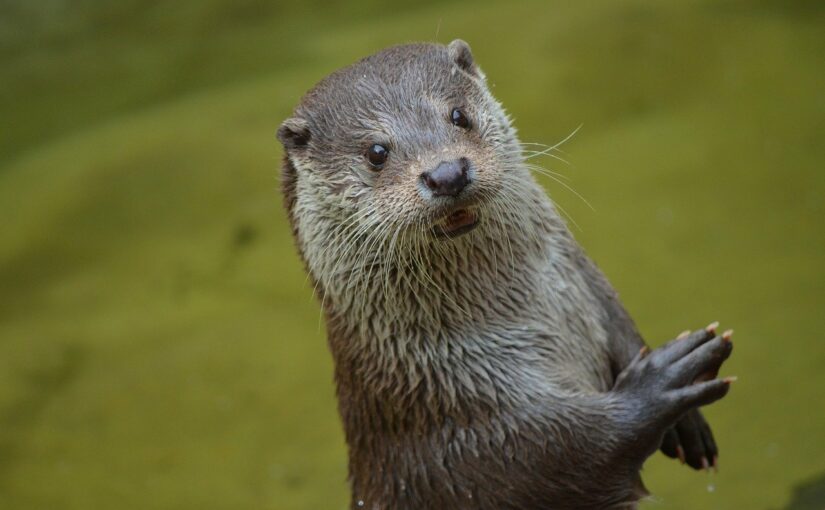 I woke up soaked on an unfamiliar beach, the remains of the lifeboat scattered like a shattered shell around me. Lifting my face from the sand, I was amazed to see an otter and a stork sitting a few feet away, staring at me.

“We didn’t know how to tell,” the stork explained. “You being such a strange creature.”

Talking animals. Clearly, I was either asleep or deluded. I slapped myself across the face, hoping it would snap me back to reality.

“I don’t think he’s well,” the stork muttered out of the corner of his beak.

I slapped myself again.

“Is that working for you?” the stork asked.

“I’ll help.” The otter scurried over and started slapping me back and forth. “Is that working?”

“Alright, but it was your idea.”

I got to my feet and looked around. The beach was a glorious ribbon of gold backed by gently rolling dunes. Across an inlet, verdant woodland grew above rugged cliffs. A lighthouse stood proud in front of the trees.

I had no idea where I was, but the sky was blue and clear with just a few fluffy white clouds.

“You look confused,” the stork said. “We should get you to someone who can help.”

I followed them along the beach. The way I saw it, there were two options. Either I was imagining them talking, in which case following did no harms, or my scrambled brain was seeing people as animals, in which case they really could help. Either way, this was the best option.

We approached a small town spread across the sides of the inlet and up the river beyond. Cobbled streets were lined with houses that ranged from the tiny to the towering. Quays stretched across the inlet, sheltering a host of sailing boats. The streets bustled with life, from scurrying mice to a giraffe clopping down towards the shore, and birds circled above, gossipping and singing to each other.

My guides led me to a harbour master’s office, where a grisly bear sat hunched behind a desk, a quill pen pinched between her claws.

“What have you two found?” she asked, staring at me.

“I think he’s some kind of ape,” the otter said.

“Or she is,” the stork added. “Can’t tell with that strange fur all over it.”

“Pleased to meet you,” I said, holding out my hand.

The bear stretched out a paw and I took it, expecting to feel the reassuring touch of human fingers beneath my delusion. Instead I felt fur, as real as the floorboards beneath my feet or the sand that had found its way into my underwear.

Perhaps I was still asleep. I pinched myself on the back of the hand but failed to wake up. The bear imitated the gesture, pinching her own furred flesh.

“You have very strange greetings,” she said, “wherever you come from.”

Somehow, that made it all seem more real.

“I come from Brighton,” I said. “The ship I was travelling on was wrecked and now I’m hoping someone can transport me home.”

“I see. Where is this Brighton?”

“And this London is…”

“London. The capital of England.”

The bear tilted her head on one side.

“And where is this England?”

I gaped at her.

“You run this harbour, and you don’t know-”

I stood aghast. If this wasn’t England – a point I wasn’t yet ready to concede – its inhabitants must at least know which way home lay.

So that was how it went. They’d trapped me here somehow. Well, I wasn’t going to stand for it.

“I’ll take myself!” I stormed out the door and strode down to the harbour. Animals turned to watch me – dogs, cats, sheep, a family of voles – but I ignored them. They weren’t real, and that meant they weren’t worth my time.

At the end of the quay, I leapt onto the nearest boat.

“Here, what are you doing?” a salamander said, sitting up in a deck chair at the front of the vessel.

“I’m sailing for England,” I declared, grabbing hold of a rope.

“Just try to stop me!” I said, glaring down at him. No figment of my imagination was keeping me from home.

“So you’re a sailor, then?” asked a familiar voice from the harbour side. The otter was peering down at me, and I could have sworn that he was smirking.

I looked at the rope in my hands. I didn’t even know if it was connected to anything, never mind what it did.

“Come see something,” the otter said.

With a sigh, I climbed out of the boat and followed him through town, across a bridge, up a trail, and into the lighthouse. We ascended its circling stairs and emerged onto a platform below the light.

Looking out, I saw green fields and wide forests in one direction, endless blue ocean in the other, and below it all the most idyllic little town I’d ever seen.

“I don’t know what it’s like in Brighton,” the otter said, “but around here, life’s peaceful and pleasant, there’s plenty to eat, and, well, it looks like this.” He gestured with his little paws. “Maybe just stay for a few days, while you work out how to get home.”

I looked. Given what my real life was like, a little more dreaming might not be so bad.

“Of course you will,” the otter said with a smile.

Thinking about Redwall also reminded me of its prequel, Mossflower. I enjoyed Mossflower. It had many of the things that I’d loved in the first book – animals with funny accents, fantasy action, delicious sounding food.

But somehow it didn’t feel quite right. The legend of Martin the Warrior loomed so large over Redwall that reading about his adventures couldn’t live up to the vague but exciting image I had in my mind. It’s part of the problem with the Star Wars prequels too – they could never live up to the things us fans had imagined over the years.

Are prequels always doomed to disappoint? Given the pictures we all paint in our minds about what’s come before will they always leave most of the audience disatisfied, no matter how hard the author tries?

I don’t know for sure. I can’t think of enough prequels that I’ve read or watched to draw a firm conclusion. But as logic goes it feels right.

What do you think? Can you point me at some good or bad prequels? Or do you feel the same about sequels too?

I know that New Year is meant to be a time for looking forward, but I just read a post that made me want to wax nostalgic. So today lets give it up for a children’s fantasy classic – Redwall.

Rats and mice and swords

Redwall is an anthropomorphic animal fantasy story in which good animals defend their abbey home from bad animals. The first in a series of books by Brian Jacques, it was one of my first fantasy reads and I’m still a fan. It’s a bit twee for adults unless you’re riding a nostalgia wave, but it’s a great fun read for kids.

The reason I love this book is in the details. Different types of animals have different accents, from the broad rural accents of the moles to the Irish ferret sidekick to whatever the shrews are meant to be. The routines and festivities of life in a medieval-style community are nicely laid out. And the food, the endless, delicious-sounding food, like an Enid Blyton picnic made magnificent.

Sure, there’s an exciting tail of peril and adventure as well, but what matters is the moles and the scones.

I recently re-read Redwall as a bedtime book for Mrs K. As an adult I can see some problems with it. The love interest is a terrible example of the traditional soppy domesticated helpless little woman. The lead is kind of bratty, though he’s the mouse equivalent of a teenager so lets call that good characterisation. And by making certain species of animals good and others bad it shares The Wind in the Willows’s uncomfortable underlying message that our morality is, in part at least, pre-destined from birth.

Still it’s a vivid adventure, one of courage, intelligence and determination in the face of terrible odds. It’s an accessible introduction to sword-wielding fantasy for primary age children. And it’s a book that I’ve loved for decades, and I can’t wait to share it with a future generation.

My brother’s cat is angry with me.

She’s staying with us for a week over Christmas, and when I brought her into the house for the first time she prowled for five minutes then completely vanished. An hour later I found her sulking under the bed in the back room. She glared at me but otherwise failed to acknowledge my presence or my attempts to coax her out to a warmer, more comfortable spot.

I guess she likes sudden change as much as most people do.

It’s easy to forget when writing animals that they have their own personalities. I’m about to write a scene where my potagonist fights a manticore. My previous monster fighting scenes have treated the creatures more as forces of nature than characters, just something to be overcome. This time I’ll try to think about the manticore’s intentions – what it likes, what it fears, how it feels about being screamed at by an arena crowd. Finding ways to show that should make its actions more interesting and the scene more exciting.

Maybe the manticore also wants to hide under the bed.