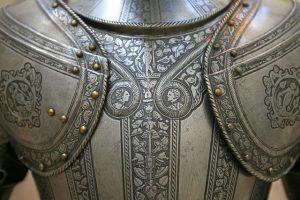 Savine curtsied as Queen Dara entered the tapestry room, the temporary royal chambers in this far-flung castle. The Queen, resplendent in her ornate plate armour, swung the door to behind her, silencing the chatter of commanders and courtiers beyond.

“At last,” Queen Dara said, settling on a stool with her back to Savine. “Peace.”

Savine set to unbuckling the armour, starting with the lions head pauldrons. She wished that she felt some peace, but that morning she had awoken to a stiffness in the muscles of her cheeks, a feeling any changeling dreaded. She had worn this image so long, it was setting. She had to act soon, or be trapped forever with the face of a demure lady’s maid, unable to adopt new guises or to return to her true form.

“People expect me to be a liar,” the Queen said.

“Your majesty?” Savine wanted to hear more. These were the moments when she loved the woman most – when no-one was around and she revealed some private part of herself, yet the grace and power of the monarch stayed strong.

Savine began unbuckling the back plate.

“They assume that I use lies as a weapon,” Dara said. “Against them, of course.”

She placed a hand against the breastplate, holding it in place while Savine removed the back.

Carefully, not wanting to scratch the polished metal, Savine placed the back plate on the floor. She raised her hand, flexing long-neglected muscles. Her flesh rippled and twisted, contorting into the shape of a knife. The only way that an assassin could bring a blade so close to the Queen.

Raising the hand, she stared at Dara’s back, clothed in a red arming jacket. It would be so easy to punch through that padded cloth and into the heart below, to complete her mission and end this.

She hesitated, putting off the moment, enjoying the voice of her mistress, her prey, for just a moment longer.

“I only lie to those I love,” Dara said, her voice soft yet firm. “Lies take effort, and I would not waste my energy on those I detest.”

The words caught at Savine. In her time with the Queen, she too had learnt what it meant to tangle lies and love.

The knife-hand trembled, held back from its strike.

“The breastplate?” the Queen said. “I can’t hold it here all day.”

Savine lowered her hand, but kept it in the form of a blade. She couldn’t do this, but she couldn’t live with the lie any longer. That left only revelation.

“Your majesty…” she began, her voice trembling.

“Some of my advisers believe that I am impressed by radical acts of honesty,” Dara said. “With them ‘speaking their minds’, choosing tantrums over tact. They do not understand that some truths are best unspoken.”

The breath caught in Savine’s throat. She looked at the way the Queen sat, her uncharacteristic stiffness, her patient waiting for that breastplate to be taken.

She knew what Savine was, and yet she chose to trust her.

Savine’s vision blurred for a moment. The woman who had slain Earl Harford in front of his own children found herself reduced almost to tears. She yearned to confess, to relieve the tension knotted inside her. But her mistress was asking for the lie, for the chance to continue.

If Savine confessed to being a changeling and an assassin, it would force the Queen to reject her. But she couldn’t continue like this. Not with this tension constantly twisting her inside. Not with her face on the verge of setting, trapped so long in this form.

“I’m sorry, your majesty,” she said, lowering her hand, forcing it back into a human shape. “I feel unwell. Perhaps someone else could wait on you this afternoon?”

“Of course,” Dara said. “Take a few days off, away from the rest of them. Do what you need to get well.”

“Thank you, your majesty.” Savine stepped around the Queen, took her breastplate in both hands, and lowered it carefully onto the floor.

“You’re trembling,” Dara said. “Go now. Send someone else to finish this. I can’t have you straining yourself while you are unwell.”

“Your majesty,” Savine said with a curtsy. “I will be back soon.”

As the Queen had said, she should only lie to those she loved.