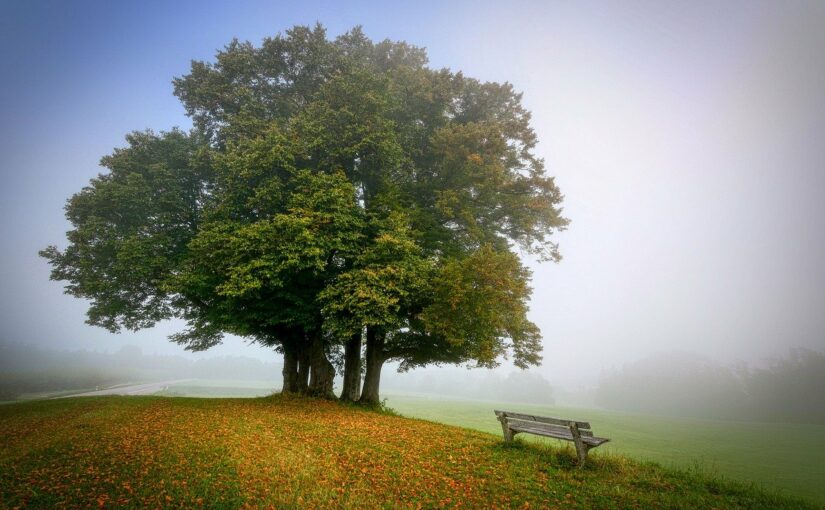 Tom was adjusting the leaves on old oaks when he noticed a gradation in their colour, an orange in the recesses that hinted at autumn rising through the last lush days of summer. Curious, he took off his glasses and his overlay disappeared, revealing the meatworld leaf. For a moment he wondered if the orange had crept through his holographic filters, riding on the back of the street signs, road markings, and emergency vehicles that had to be allowed unfiltered through ampglass, but the real leaf was a dull and disappointing green, with none of that rich, warm glow.

He put his glasses back on and his private world returned. The colour must be a glitch, but it wasn’t a bad one. Instead of over-riding it, maybe he should adopt it for all the trees, for a few weeks at least. It would add richness to his daily walk, the sort of richness that created his moments of happiness between days in the office and evenings home alone.

He walked to the next tree and took a leaf in his hand, thinking about how to give it that orange layer. His eyes widened as he saw that the orange was already there. He took off the glasses, rubbed his eyes, put the glasses back on again, but nothing changed. The orange wasn’t just a glitch in one tree. Nausea lay heavy in his stomach as he realised that someone had hacked his world.

Blinking, Tom glanced around. Other people were out in the park, walking their dogs, riding their bikes, chatting as they strolled around, people Tom didn’t know and had never cared about before. How could he possibly tell which of them had broken into his private space? Was the culprit even there? He clutched his stomach, his hand trembling at the thought of the violation.

Then he saw her, a woman in jeans and a superhero hoodie, frowning up at a tree he had turned silver the previous day. In his eyes, reflected light dappled her skin as she reached for a leaf, her face made all the more luminous by curiosity. Surely she wasn’t seeing what he did?

“That’s a very personal question.” The woman looked around, an eyebrow raised. “Who are you and why are you asking?”

“Hm.” She stared at him suspiciously. “I see silver.”

“I knew it!” The words stabbed at her accusingly. “What are you doing in my overlay?”

“Your overlay? What are you doing turning my tree silver?”

“You put orange in mine!”

“The leaves needed more orange. It brings out the green.”

“Then bring out the green in your own overlay!”

A group of cyclists stopped to stare at them. Tom hunched his shoulders and leaned away from her, lowering his voice to a normal level.

It wasn’t that he disliked the orange, it was the principle of the thing, the sick feeling at losing control over the world that was his, the one thing he could make perfect.

“This is my space,” the woman said sharply. “You’re the one trespassing.”

“I am not.” He whipped off his glasses and brought up his holographic frequency on one lens. He pointed from that to the identical number printed on the arm of the glasses. The woman leaned in, her long hair tickling his arm, then took off her own glasses and stared at the production number.

“Damn,” she whispered. “How did that happen?”

Each set of ampglass was meant to have a unique production code, a wavelength for the user’s holographic overlay. Though their glasses were in different styles, hers a cute yellow plastic, his a more traditional black, the digits on them were identical.

“Manufacturing mistake.” Tom’s mouth was dry. If there had been an error, then one of them would have to give up this wavelength, and it could be him as easily as her. He had spent months perfecting this park, and now he couldn’t bring himself to look at it.

“Just when I’d got the grass the way I like it,” the woman said, hanging her head.

“And the sky’s a perfect blue.”

“I know. Why do so many people pick something brighter?”

They laughed and he grinned at her sheepishly. She fitted in so well here in the park, beautiful yet relaxed, her laughter as lovely as the singing of the birds. She could almost have been something he created, except that he was seeing her without the benefits of ampglass. When was the last time he had spoken with anyone like this? He couldn’t even remember, and that thought made him unaccountably sad.

“I like the silver tree,” she said. “I’ll keep it if they let me keep this place. Might even copy it if they don’t.”

An idea uncurled inside Tom’s heart, like a leaf unfurling in the first thaw of spring.

“Maybe we could share, for a while at least. We seem to like the same sort of world.”

Tom shrugged and offered her a lop-sided smile. “Who’s going to stop us?”

The woman’s eyes lit up. She smiled and nodded at him, then held out a hand.