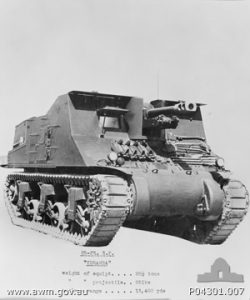 “They can’t take her,” Alf said, sticking out a petulant lower lip. “It ain’t fair.”

Bernie looked from his mate to the half dozen other artillery drivers stood around the yard, waiting impatiently by their vehicles. Yeramba self-propelled howitzers were ugly buggers, squat boxes on tracks with a gun protruding from the front. Like their crews, they were showing the wear and tear of the past seven years. And like their crews, he wouldn’t have traded them in for all the rest of the Australian army.

But it wasn’t his choice.

“They’re obsolete, Alf,” he said, taking off his beret and scratching his head. “Sorry, mate, but we’ve got to let ‘em go.”

“Who you calling obsolete?” Alf glared. “This girl and me, we’ve got a few years in us yet.”

“It ain’t about you, Alf. It’s about her.” Bernie laid a hand on the sun-warmed metal plates of the Yeramba’s body. “You’ve got to let her go.”

“Shan’t.” Alf clambered in through the hatch and squatted there, staring out.

“Orders are orders,” Bernie said with a sigh. “We’re taking them to the depot to be dismantled. Do you really want this to be our last memory of the regiment, you crying like some little girl?”

Alf’s lower lip trembled. Tears welled in the corners of his eyes. Bernie looked away, embarrassed.

“We’ve had some good times, haven’t we?” Alf asked, his voice heavy.

“We have,” Bernie agreed. “We were a fine regiment, and these were damn fine girls to drive. But unless you’re planning on setting up your own one-man army, it’s time to let go.”

He looked back at Alf just in time to catch a glint in his friend’s eyes. Was that tears, or was it something else?

“Oh, nothing.” Alf laid a hand on the hatch.

“Are we going yet?” someone shouted impatiently from the other side of the yard.

“In a minute.” Bernie strode over to the rest of the drivers and lowered his voice. “Look boys, I know you’re all impatient to get this over with. I ain’t enjoying it much either. But Alf needs our help right now.”

The clang of a steel hatch shutting was followed by the low rumble of a twin diesel engine.

“Alf?” Bernie hurried back across the yard. “What are you-”

“Saving her!” Alf’s voiced was clear even through the walls of the Yeramba and the engine noise. “Going to be an army of our own.”

With a crunch of treads in the dirt, the Yeramba rumbled towards the entrance of the yard. It smashed through the barrier pole and out onto the road, building up speed past a mighty twenty miles per hour.

“Who’s obsolete now, you bastards?” Alf’s shout filled the air as he disappeared.

“Shouldn’t we stop him?” someone else asked. “I mean, this is mutiny, right? He could get in all kinds of trouble.”

Bernie shook his head. Sadness and frustration turned to laughter. Maybe this was the perfect way to see the regiment out – strong, defiant, and a little futile.

“With all his fussing, Alf didn’t get to filling up on fuel,” he said. “He’ll have run out within a mile. Lets go pick him up before he wanders into the outback.”

They got into their Yerambas, revved the engines, and headed out the ruined gate, running towards one final mission at a stately twenty miles per hour.

The Yeramba was used by the Australian army between 1950 and 1957. You can find out more about it from this article on Russell Phillips’s blog. And if you’d like to read more flash fiction, often with historical and military themes, then why not sign up to my mailing list at this link – you’ll even get a free e-book and a story straight to your inbox most Fridays.