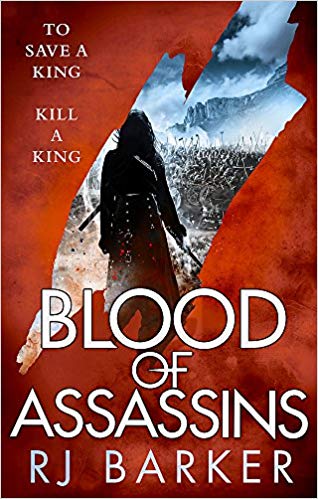 As the end of the year approaches, it’s time to look back on what’s been good in 2018. I’m going to start with fiction – not necessarily books that came out this year, but ones I’ve read and enjoyed over the past twelve months. 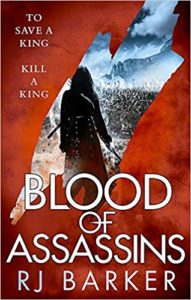 This year saw the release of volumes two and three of RJ Barker’s Wounded Kingdom trilogy – Blood of Assassins and King of Assassins. Age of Assassins was one of my favourite books of 2017, so I had high hopes, and RJ absolutely lived up to them.

Girton Clubfoot is an assassin, his skills all about killing. When he and his master are called upon to save a life instead of ending one, they become drawn into the politics of a court at war with itself in a country ravaged by dark magic. Everybody has their secrets, from the king down to the stable hands. Some of them are willing to kill to keep those secrets safe, and it won’t be long before Girton finds himself on the sharp end of a blade.

This series consists of three murder mystery political thrillers set in a medieval fantasy world. There’s war, magic, crime, and intrigue aplenty. But what makes it stand out is the characters. With the books set years apart, we get to see them maturing and their relationships changing. They both shape and are shaped by the kingdom around them. Villains become heroes while heroes lose their way. The protagonist goes from a fumbling apprentice to a master of his craft. And through it all, there’s an exploration of family – what it is, what it means, and how it shapes us.

I don’t want to say much more, for fear of spoiling the series’ splendid twists and turns. While the first book was compelling, it’s the finale that makes it powerful. These are smartly written, compelling novels. If you enjoy fantasy at all, you should give them a go.

Dogs of War by Adrian Tchaikovsky 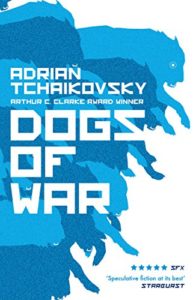 Rex is a good dog. All he wants is to do what his masters tell him and be rewarded with their love and gratitude. Unfortunately, Rex is also a seven foot tall muscled monstrosity, genetically engineered as one of the world’s deadliest killing machines. So when things start to get confusing for Rex, when the boundary between enemies and innocents becomes unclear, there’s trouble coming.

Dogs of War is a stand-alone sci-fi novel about the abuse of power and what it means to be a person. In Rex, it has one of the most perfectly written, perfectly heartbreaking viewpoint characters I’ve ever experienced. The difference between his innocent worldview and reality is skillfully implied from the very start, making for a really emotional read. And as the story shifts, digging deeper into the fate of creatures like Rex, it raises intriguing questions about how humans cope with the consequences of what we create.

I’ve been reading a lot of Adrain Tchaikovsky’s work recently. So far this is the standout story, a great book from a great writer.

The Copper Promise by Jen Williams 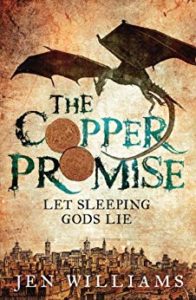 Years behind my friends’ recommendations, I’ve finally got started on Jen Williams’ Copper Cat trilogy and it was well worth it.

Another fantasy series, the Copper Cat trilogy follows a band of mercenaries whose attempts to make a living drag them into saving the world. What starts as a gritty story of lowlives in scummy taverns slowly escalates into an epic of gods and monsters in which mortals struggle to save the innocent from destruction.

Like all the best stories, the characters are what drive these books along. There conflicting motives and personalities ensure that there’s always trouble brewing, but their friendship pulls them together in battles against the odds. Sharp dialogue and lively action scenes become a conduit for those characters, not a distraction from them.

I haven’t yet read the last book in the series, but based on the first two, I’m sure I’ll enjoy it. And I can definitely recommend the first two, starting with The Copper Promise. 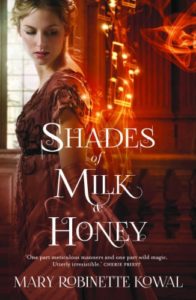 Imagine the early 19th century but with magical art that crafts illusions. That’s the world of the Glamourist Histories.

At the heart of this series is Jane, the narrator and protagonist. A young woman born into the English gentry, she starts out looking for all the things we expect from a Jane Austen character – love, marriage, a secure future. But Jane is also a skilled glamourist, able to use her art to bring beauty from thin air. If she can find a way to pursue her art, then life promises much more for Jane, even if she can’t see it.

Though character is the consistent thread of these books, it’s the variety of settings within them that I particularly love. One is a Jane Austen pastiche, the next a Napoleonic espionage thriller. We spend time with the reformers of London, the glassblowers of Venice, and the slaves of the Caribbean plantations. A lot of the themes of real 19th-century history are explored in the space of five fantasy novels.

I finished this series this year on audible, where the books are wonderfully narrated by the author. They’re a very different take on fantasy from most of what I read, drawing on different threads of history and society, rich with social tensions and the challenge of change.

So those were my top reads this year. What were yours?