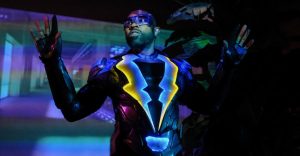 I love superhero stories. I watch the films, I read the comics, I binge the shows. There are pictures of Spiderman, the Hulk and Captain America on my living room wall. But even I have to admit, superheroes don’t often make sense.

Take Batman. I love Batman, but Bruce Wayne’s vigilante antics aren’t the best thing he could do for Gotham. If Bruce Wayne invested all that time and money into supporting the police, the authorities would be able to handle the supervillains. On top of that, cops wouldn’t waste time hunting him down. His city would be a better place if he didn’t make it about him.

A lot of stories have tried to solve this problem. Superpowered villains are used to balance superpowered heroes. Writers roll out awkward arguments about accountability and authority. Sometimes someone creates something unusual, like Warren Ellis’s politically charged run on The Authority. But there’s always a drift towards the status quo. A superhero acts outside a system that’s assumed to be just, and a minute’s thought shows that this isn’t a good thing.

Not so in Black Lightning,  the latest TV show based on a DC comic. The protagonist is African-American and a leader in his community. The show highlights inequalities of race in the United States. The system, built out of law, economic interests, and social attitudes, is rigged against him and the people he loves. And thanks to that, his story makes sense. As Bradon O’Brien cogently argued on Tor.com, Black Lightning reflects the experience of black America in a way other superheroes don’t. It’s an experience that cries out for justice the system can’t provide.

In some ways, this harks back to the origins of Superman as a left-leaning character looking out for the downtrodden workers. But it’s more than that. It’s a show that takes an injustice baked into western society and offers a superhero as a symptom, if not a cure. The character of Black Lightning doesn’t go around calling for radical reform, but his life shows why it’s needed.

Sure, creators have prodded at this combination of ideas before. But this is the first time it’s been so thoroughly explored on screen, where superheroes reach a wider audience. And for that, it’s both an interesting and an important show.