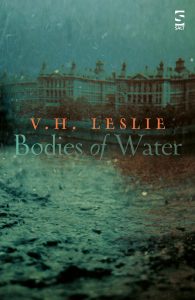 Bodies of Water is the story of two women, Evelyn and Kirsten. They live in the same building but in different eras. For the Victorian Evelyn, Wakewater House is a hospital using water to treat women’s ailments. For 21st century Kirsten, it’s a new home, a near-empty building of converted flats in which damp is a constant problem.

Both women are struggling with the harsh events that life has thrown at them. Both become intrigued by the waters lapping at their lives. And both face strange and disturbing events.

The Specifics and Strangeness of History

I was drawn to this book after hearing the author talk about it at Fantasycon. She’d researched the way women were treated by doctors and the police in Victorian England, uncovering some fascinating and deeply troubling practices. It’s an issue that the book explores, an unfamiliar area of history that draws attention to the creeping, socially authorised nature of much abuse. Setting this alongside a modern story helps to draw attention to the dark, strange, and yet somehow too familiar elements of both settings.

The history accentuates the horror, while the horror brings out important themes in the history. Like much of the best historical writing, by implication it also says something about the modern world. The juxtaposition of parallel narratives makes that implication clearer.

A Book for a Specific Audience

This book isn’t going to be everybody’s cup of tea. It combines history, horror, and feminism to explore all three. Leslie’s understated approach means that it lacks the immediate intensity off some writers in all three fields. Like a spreading damp, it eases toward its potentially destructive conclusion. If you’re looking for something that’s thoughtfully, almost gently unsettling, and if you’re interested to see these genres intersect, then It’s well worth reading.

If nothing else, it’s a good lesson in combining genres.