What books are you excited about at the moment? Here’s my current reading heap, or at least the tip of it.

A science fiction story that combines politics, technology and crime in an intriguing near future tangle. Being a fan of abeyance, I like the way that the world is slowly built up through dialogue, thoughts and actions, revealing how Hearn’s imagined future is different from now. It’s definitely a novel that’s focused on plot and pace rather than intricate prose – for example, there’s almost no physical description of the characters, letting you fill in the blanks as you see fit. I’m maybe a fifth of the way through, and really looking forward to seeing where this goes.

Write Your Novel From the Middle by James Scott Bell

Several writing buddies have recommended this to me as a top book on plotting. I haven’t started reading it yet, but I’m looking forward to seeing what all the fuss is about.

Plus my legs are really tired from working at my new standing desk, and reading this is a productive writing thing I can do while sitting down.

Seriously, my right calf is killing me. Who’d have thought standing still would be so much exercise?

The Bookman Histories by Lavie Tidhar

I’m still slowly working my way through this, and it’s still worth the effort. Somewhere around page 180 of the first book things have taken an unexpected turn, feeling much more pulp action oriented than what came before. The references to history and other works are also becoming less obstructive and more part of the natural flow of the story.

I stand by my initial assessment that this is an incredibly rich read full of fantastic ideas. Now it’s one that’s found some pace as well.

What are you folks reading at the moment? Anything you’d care to recommend? And if you’ve read any of these books what did you think? Share your literary appreciation by leaving a comment. 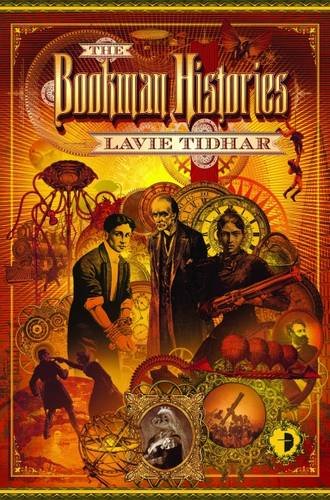