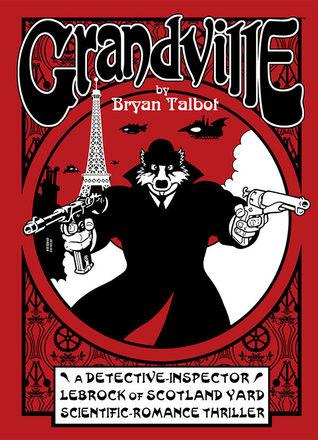 A someone focussed on words, I’m normally drawn to comics by their writers. But there three exceptions, artists whose work is so distinctive and brilliant that I’ll pick up a book just for them – Jamie McKelvie, Frank Quitely, and Bryan Talbot. Fortunately for me, Talbot is also a fan of stemapunk, as shown in one of his worlds that I’ve returned to this week, the strange place that is Grandville.

Wind in the Willows But With Murder

Grandville and its sequel, Grandville Mon Amour, are the sort of strange, idea-packed stories that the comics industry is particularly friendly towards. It’s a steampunk that combines an alternate history in which Napoleon won with a world of anthropomorphic animal people. Into this mix are thrown murder mystery plots which must be solved by the hero, Detective Inspector LeBrock.

One of the reasons this setting works so well as a comic is that the visuals provide a constant reminder of the setting, without getting in the way of the plot. Every moment your eye is on the page acts as a reminder of the odd world Talbot has created. This means he doesn’t have to stop to describe a strange gadget or the hamster landlady – they’re just there on the page, the story flowing through them.

Tying the Strands Together

As detective stories, LeBrock’s adventures aren’t particularly innovative in their rhythm or labyrinthine in their twists. But that doesn’t matter because they’re so strongly told. The central character, the setting and the crime are all neatly connected, meaning that each one helps to inform the readers about the other parts. The alternate history background is not incidental. The Socialist Republic of Britain’s recent separation from the French Empire is intrinsic to the mysteries LeBrock faces, the obstacles standing in his way, and his own life.

Story, character and setting all inform each other in fascinating and efficiently executed ways.

The art too is tied to the story telling. Talbot uses interesting layouts to tell sequences without words, uses his amazing skill to bring the characters and setting to life. Everything is clear, vivid and wonderful to look at. His subjects are sometimes ugly – the scarred, dog-faced serial killer; the hippopotamus brothel madam – but the beauty of his illustration makes me want to keep staring at them.

Grandville is a strange, wonderful place, and one I’d heartily recommend visiting.