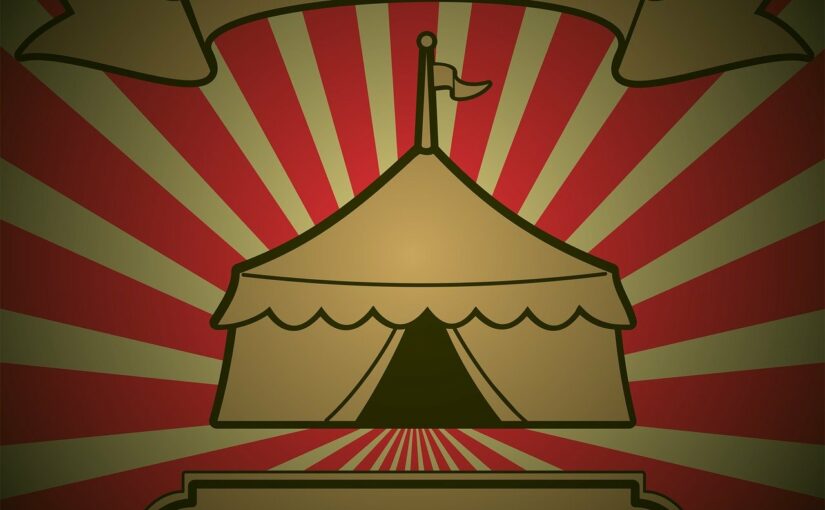 Dormud woke in the shattered stump of a guard tower that had been his home ever since The Fall. Creaks, thuds, and groans filled the air. Probably Levlin trying to rebuild the central spire again, as if that could bring the magi back, or Tolbar trying to make a lumber mill out of broken siege machines. Any minute now, Tolbar would start singing, and then any chance of sleep would vanish. Idiots, the lot of them.

Dormud dragged himself out of his pile of straw, kicked a rat away, and plucked a handful of fungus off the damp granite wall. At least he’d never go hungry as long as he stayed here in Carnage, as long as he didn’t mind the boils and the stomach cramps that came with living off the waste from a spell war.

Through the rusted bars of his window, people were gathering in the street. Not just his neighbours, but strangers in bright tunics, unloading poles and canvas from wagons. More idiots.

Chewing on his rubbery, bitter breakfast, Dormud stomped out into the town’s central crater. He’d heard whispers of the carnival, but never seen it before, and never wanted to. All these tents with their fluttering pennants, the barkers calling people to celebrate the wonders of the world, it was a cloth woven from lies. That woman in the pointed hat making puppets dance for the children, she would walk away with trinkets tossed to her by grateful parents, but what good would that do anyone? When the excitement wore off, they’d still be living in ruins, and they’d be poorer too.

Stones clattered from beneath his feet as he stomped along the slope and into one of the tents. A dozen of his neighbours sat on rugs amid a choking cloud of incense, while a string quartet played lively tunes. Everyone was smiling: the musicians, the audience, the man holding the tent flap back for Dormud. Fools the lot of them.

He stepped inside so he could see better. The music made him think of the time before The Fall, when he worked with others in the tower, serving the magi with their glittering robes and their grand visions for tomorrow. If his heart beat faster, it wasn’t because of the music, just the incense in his throat. That was why his eyes watered, why he struggled to walk away.

As he emerged, dazed and drifting, an hour later, he nodded to the man holding the tent flap. Maybe it wasn’t so bad for the inhabitants of Carnage to take a moment’s joy. It might not make the wasteland better, but it wouldn’t make it any worse.

He stomped off up the crater. Others might need the bright costumes and the music, but he didn’t. He had accepted the world as it was.

Four carnies stood along the edge of the crater, one at each compass point, arms outstretched, the wind whipping at ribbons that hung from their arms. It must be a strange wind, because all four sets of ribbons were flowing toward the crater.

Dormud squinted. He’d picked up a few tricks from the magi, a certain sensitivity. He saw the magic rising from the tents, faint but glittering ribbons that vanished into the carnies at the compass points. The power and potential of the townspeople being drained away.

The music, the incense, the smiles, it had all been a trick. For a moment, he’d let himself believe, but the world wouldn’t let him have that moment.

Dormud strode around the rim and grabbed a carny. Ribbons fell limp as he lifted her by her tunic.

“I knew this was a lie,” Dormud growled. “Leeches, the lot of you.”

“We give them joy,” the carny said in a trembling voice. “It’s a fair trade.”

“It’s not a trade, it’s a theft.” Dormud flung her into the nearest tent, which collapsed in a heap of broken poles and tangled ropes. “Leeches! Vultures! Get out or I’ll break your bones!”

He strode down the crater, casting aside carnies and tearing down tents, bellowing in fury as he went. Sad and confused, the people of Carnage watched as the carnies loaded their wagons and hurried out of town.

Dormud stood in the middle of the crater, his neighbours staring at him.

“Because they deserved it.”

What more needed to be said? These people believed him or they didn’t. Either way, they would go back to their lives of denial, the sort of idiots that carnies could dupe because a tune or a play had made them feel better for an hour. People who would give up their power, their potential, for a day’s relief.

As they turned their backs on him, Dormud heard a fragment of music, the carnies playing as they rode down the road. He remembered the world as it had been before, a bittersweet memory of shining towers, fine food, and lofty dreams.

She turned, slow as the closing of a dungeon door. “Yes, Dormud?”

“You still trying to rebuilding the spire?”

“I’ll help you with your mill later if you sing for us now.”

More people turned and looked at him in confusion, but Dormud had said all he meant to for the day. He lifted a block of stone from the crater’s edge.

The Fall was over. It was time to rise again.