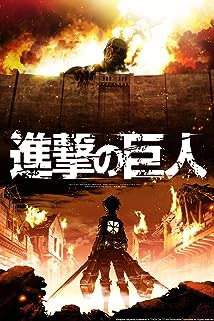 I recently decided to watch more anime, and inspired by an Idea Channel episode, I chose Attack on Titan. It’s a show that probably deserves two reviews, so here we go…

It’s All About Style

Attack on Titan is the weirdest and most fascinating thing I’ve watched in years. Set in a fantasy landscape based on a Japanese perspective of 19th century Europe, it’s a story of survival. For a hundred years humanity has been contained within a vast walled city, threatened from the outside by the Titans, monstrous giants who eat people for fun. When the first of the city’s three rings of walls is breached, a group of young people are propelled into the armed forces fighting for humanity, and a slowly unravelling plot to find out what’s behind the Titans.

I love the imagination of this setting. The towering walls and lumbering giants give it a sense of the epic and the unreal. The soldiers use gas-fired grappling wires to hurtle through the air and attack the vulnerable necks of the Titans. The fundamentals of how this war is fought are like nothing else I’ve seen. Like most fantasy, they look nonsensical if you take a step back, but they’ve been thought through in detail and are so different that I was fascinated. They also allow for some immensely cool and unusual action sequences.

This bonkers style is what I love about Attack on Titan.

No, Wait, It’s All About Substance

Attack on Titan is the deepest, darkest exploration of the horrors of war I’ve ever seen in fantasy. Set in a civilisation on the brink of extinction, it sees a group of young people propelled into the armed forces, struggling to cope with the traumas of that life. They see friends eaten by monsters, civilians crushed beneath falling buildings, superiors turning to cowards or running out of control. They face their own rage, depression and even cowardice in the face of war. Their lives have no neat answers – sometimes friends die in battle without them ever learning why or how. In Attack on Titan, war really is hell.

What’s extraordinary is how compelling this is. The absurdity of the war they’re fighting – swinging on wires as they try to fight monsters – only makes the trauma more stunning and realistic by contrast. It makes the reactions and transformations of the characters into something that left me too stunned.

Dammit, Now I Have to Wait

I watched the whole of the first season of Attack on Titan on Netflix, then discovered that the next series won’t even be on TV until 2016. It’s going to be a long, impatient wait, because bizarre as this is, bewildering as some people will find it, I thought it was an extraordinary show, both in its style and its substance.