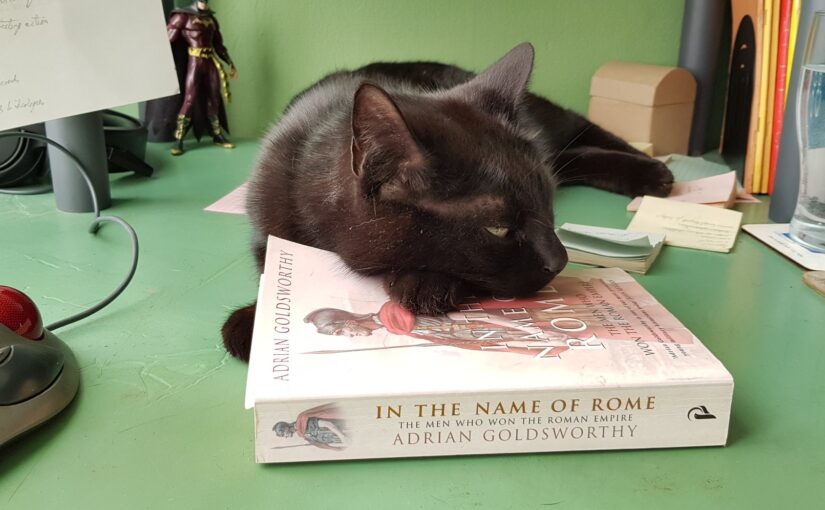 Here’s Elmo enjoying an interesting read on ancient military history, which might well have been put there to keep him off my keyboard. He is, as usual, helping.

I don’t know what to write this week, so have a picture of Elmo as he considers edits to my latest story.

Never trust a salesman. I was explicitly told, when I subscribed to Professor Turnberg’s Cabinet of Wonders, that they would substitute other mechanicals for those in a likeness of animals, as per my directions. After all, if I wanted a pet I would have bought a pet. What I wanted was mechanical art, but when I opened this month’s box, I found inside a life size clockwork cat.

I spoke to the delivery man, of course, as he was departing with last month’s miniature train, ready to take it to the next subscriber. He promised that he would raise the issue with his superiors. I fully expect a response by the end of the week.

No reply from Turnberg’s. I wager the delivery man never even passed on my message. I shall write to his superiors to complain.

In the absence of another mechanical piece to adorn the drawing room, I have reluctantly unboxed and wound the cat. It stalks the floor as my mother’s dreaded Mister Snubbles once did, rubbing itself against the furniture and purring in its strange, mechanical voice. I will admit that the work is uncannily convincing, but in a model of a cat, I find that far from appealing.

During a visit for tea, Lady Kirby insisted that I name the cat, saying that I could not spend a whole month calling it “the beast”. After some consideration, I have settled for Bella – if I cannot have the beast I will have beauty, however unfitting that name is.

Bella is becoming almost as much trouble as a real cat. It roams the house and protests before any closed door, of which there are many, given its propensity for scratching antique furniture. The is an infernal nuisance, but I cannot simply let it wind down and stop – what sort of house does not have a mechanical on display in this day and age?

Today, Bella brought me a dead rat it had caught in the kitchen.

A dead rat. On my writing desk. Disgusting.

I must admit, the sophistication of this feline mechanical is truly admirable. Between the hunting, the playing, and the rubbing against my legs, it is unsettlingly close to the real thing. I will be glad when it is gone.

Bella has taken to sleeping on my desk while I work. It is inconvenient, but allows me to better show her off when business associates come calling. Having such a fine mechanical can do my reputation no harm.

Today, Bella did not come to sleep on my desk. I should have been more productive, but instead found myself worrying that my prize mechanical might have come to harm. I eventually found her sleeping in a box in a spare room. Her little chest was rising and falling as she purred in her sleep. Truly a remarkable piece of art.

No Bella at my desk for the third day running. I was eventually able to lure her into the study with a mouse-shaped toy on a string, but then she caught the mouse, chewed it up, and tried to swallow it. Only swift intervention on my part saved her from with shredded cotton tangling her gears. I would not want to have to pay for damages when she is returned to Turnberg’s.

Now she is sleeping in a sunbeam on the rug. I have drawn a sketch of her there, just to keep my hand in with the old pencils.

Three nights ago, I forgot to close the bedroom door and Bella came in to sleep with me. Since then, she has become my companion every night, curled up by my feet, sometimes rising in the darkness to go and chase mice in the kitchen. After years on my own, it is strangely comforting to share a bed, even with a mechanical beast.

At last, a letter from Turnberg’s acknowledging their mistake. They have promised that, from now on, my monthly subscription will match my request for no animals. As compensation for their mistake, this month they will be sending me an intricate clockwork village from their elite subscribers list. I greatly look forward to impressing Lady Kirby with it when she comes for tea.

Bella is back on the desk, in a box I placed there for her.

I find myself having second thoughts about the clockwork village. Where will I even display something so fine with the house in its current state? Perhaps I should save it for another month.

Bella is due to be taken away in three days. Perhaps she can take her box with her.

I don’t think I have time to make space for the village. I will send a telegram to Turnberg’s asking them not to change my mechanicals this month. Just while I make some changes in the decor.

I have given Bella her own blanket at the bottom of the bed, to keep her off the other sheets when I’ve oiled her joints.

The delivery man came today with the second cat. I will be calling this one Bete. He and Bella have been watching each other warily across the study, but I am sure they will soon be firm friends.

Along with Bete came the first item in my altered subscription – a set of mechanical mice for my cats to chase. Next month there will be birds.

I do not like pets, but my heart skips at the sight of a truly great mechanical. 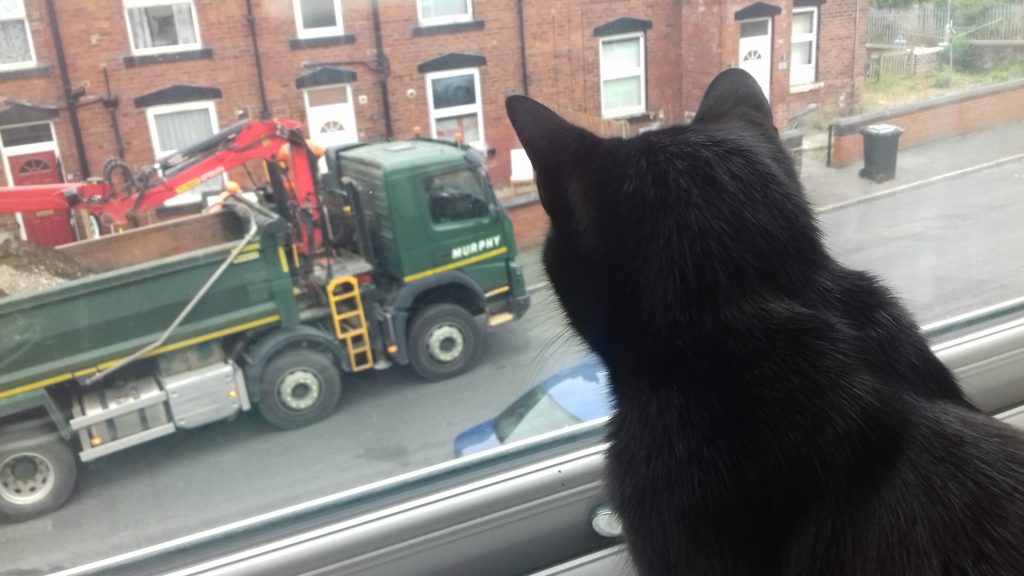 I haven’t done an Elmo post in ages, so here he is, watching a truck from the office window. I haven’t seen much of him recently, as he’s usually out enjoying the summer weather. It always feels weird to wish for cooler weather when you live in England, but I’m looking forward to him being at home more. The writer’s life can be a lonely one (plays smallest violin, gets back to decadent life of sitting around working at home).

When we’re writing stories, we often expect the characters’ motives and decision making to be all about the big stuff. Their doomed romance, their grand ambitions, their quest to save the world. But sometimes little things are just as important.

Take me. My cat Elmo recently had an injury. Nothing serious, but it got infected and he was grooming it too much, which stopped it healing. There wasn’t much I could do about it except take him to the vet and then feed him his medicine, but for two weeks it affected everything I did. I arranged my schedule around vet visits. I was extra cautious leaving the house so he couldn’t get out. I lost sleep because he was waking me in the night instead of going out hunting. Even when I wasn’t directly dealing with him, his health was constantly in the back of my mind, shaving away a fraction of my emotional processing power.

When you ask “why did someone act that way?”, you can always provide a big issue answer. But the reality is that there are often little things too, and they can make the difference.

Of course, writing isn’t just about presenting reality. We want our characters to mostly be concerned with the grand issues and big emotions. But it’s worth putting in those petty little factors from time to time, the things that distract us from the big cause or put a little extra strain on our brains. They can make characters more convincing and give you an excuse to vary their behaviour.

After all, even evil overlords must worry about their cats. 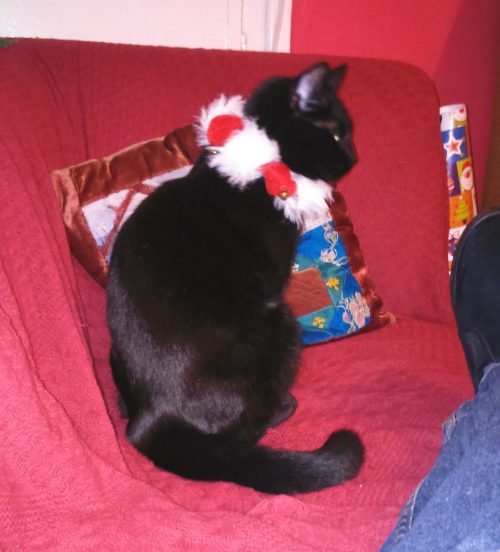 Merry Christmas from Chez Knighton! I hope you’re having at least as much fun as Elmo is having with his Christmas collar. 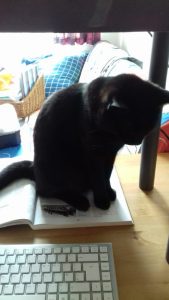 He’s learnt to catch mice, which is good, as it turned out some were living in the kitchen.

He’s made friends with other cats in the street, which is a relief after the fights and face-offs at our last house.

He’s calmed the f**k down, which makes my life easier. Now he can entertain himself by running around the allotments, he hardly ever ambushes me on the stairs or wakes me up to play at three in the morning. I almost miss those crazy days.

So well done Elmo. Treats all round. And maybe next year you can learn that the sink and the toilet aren’t good places for you to drink from. 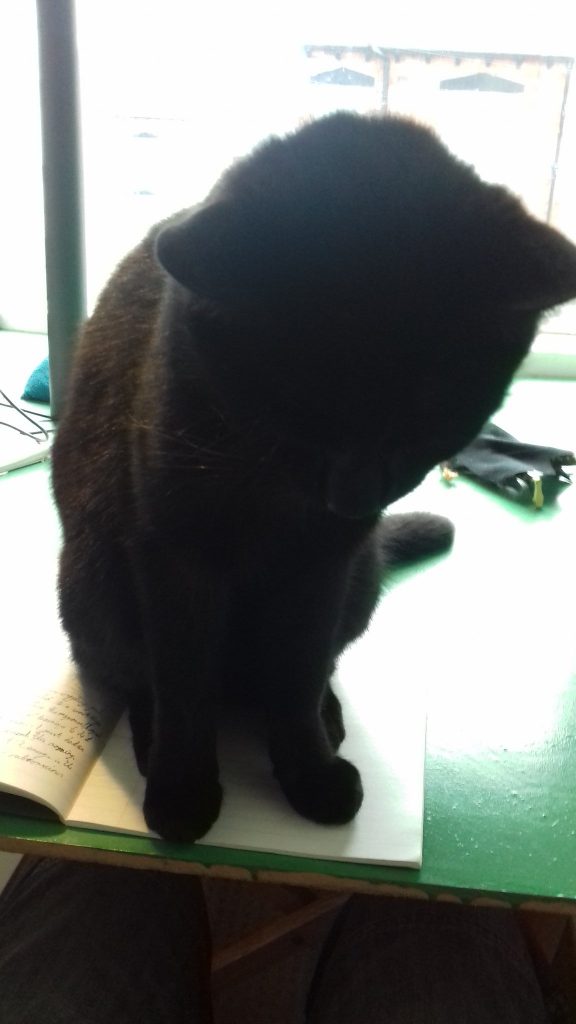 It seems I’m not the only artist in the house… 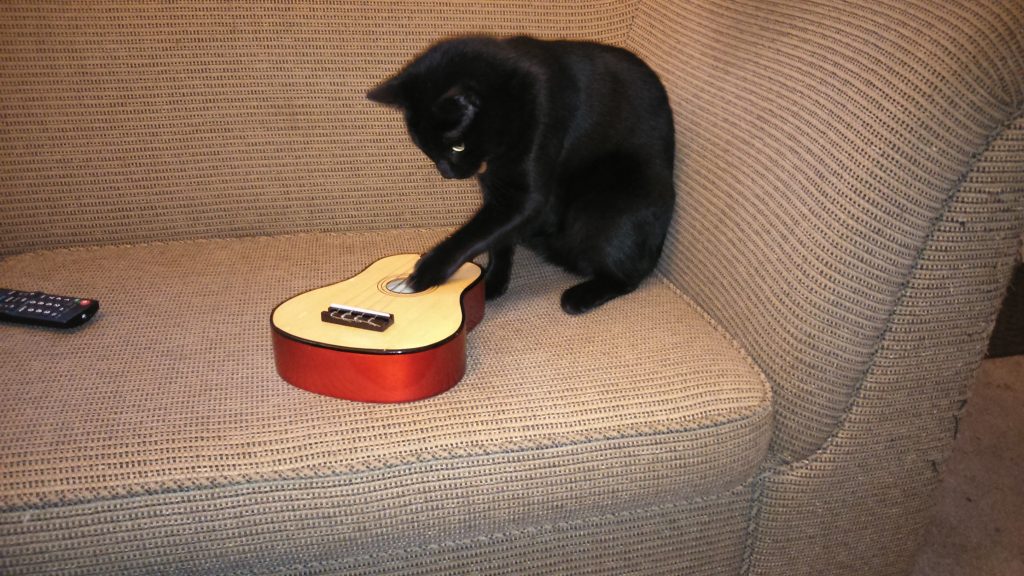