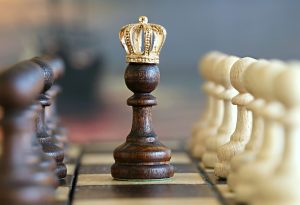 The bitterest irony is that, if we had not been winning the war, I could not have made the mistake that destroyed us.

The volunteer soldiers of the revolution marched across the land, muskets in hand, slowly pushing back the hated monarchists. It was a terrible business, the death of millions and the ruin of the land, but we were winning. As the leaves began to turn, we seized the king’s autumn palace.

There, amid the portraits, statues and tapestries, we found an automaton – the famed chess playing Turk. I knew the machine well, having studied it in detail when I was an engineer rather than a general. I knew its strategic brilliance could outmatch that of any man on our side. I was sick of the slaughter, sick of writing to the parents of the dead, sick of the smells of blood and burning buildings. In that automaton, I saw salvation. Its gifts could bring us a swifter, surer victory.

For a week I barely slept, my whole attention on adapting the machine. I turned my campaign map into a playing board; wrote punch cards instructing the machine in the qualities of different troops; extended the Turk’s arms to manoeuvre pieces around the map.

At last it was ready, its carved face staring blankly across its new game. It began to make moves. Each one was written down and turned into orders for our troops. Couriers galloped from the palace to every regiment on our lines.

The results were electrifying. The analytical genius of the Turk let us drive the royalists back. Entire armies were isolated and forced to surrender. I became complacent, not checking all the orders before they went out.

Then came the first mistake. To cut off the army of the Grand Duke, the Turk sent troops in a flanking manoeuvre through the lands of our neighbours. Foreign powers had been looking for an excuse to join the war, and now they had it. Soldiers poured in to bolster the royalists. For the first time, we were outnumbered.

In that moment I had the flash that I took for genius, arrogant fool that I was. In my mind, all the Turk needed was clearer instructions. If I could explain the politics of our war then it could take that into account. I created fresh punch cards explaining the revolution, our fight against monarchy, which neighbours clung to their own monarchs and must be handled with kid gloves. As I slid them into the machine, its demeanour changed, and in that moment of exultation I thought that I had saved us.

The Turk began to manoeuvre differently. Cautious around the flanks, decisive in the centre. We made great advances towards the capital while staying still on the borders. Diplomats rushed forth to negotiate peace with those neighbours who we could buy off. And on that playing board in the shape of our nation, the pieces of the republic drove a passage into the heart of monarchist lands.

As I have said, I was more engineer than general. I had only a creeping sense of unease before the hammer fell.

Monarchist forces formed up on the flanks of our advance. In a pincer movement led by veteran officers they cut off our main force. Deprived of supplies and of orders, our advance stalled. A month later, surrounded and starving, half the soldiers of the republic surrendered. Officers I had worked alongside through three glorious years, men who had trusted me and my machine with their lives, were hanged by the roadsides, their guts left trailing for the crows.

Never accept failure. This was the lesson my father beat into me as a child. So I returned to the innards of the Turk, desperate to understand what had gone wrong.

Meanwhile, the royalists advanced. Land we had liberated once more fell beneath the boots of the oppressors, free men and women made serfs once more.

The roar of cannons rattled the windows of the palace by the time I found the problem. There in the heart of the machine, the most fundamental rule of chess and yet one I had overlooked – protect the king. The Turk had its own principles, and the moment I had shown it what was at stake, it had turned against me. We had no king, and so it had ruined us to protect the other side.

In my rage, I raised a hammer, ready to smash the Turk’s placid face to pieces. But I had spent so long working on it that my interest had turned into an obsession close to love. Weeping, I lowered the hammer. This was my own fault. The rage was mine to receive.

As battle lines crumbled, we fled. Most went to the mountains, where they fight on now. But I took a different path. I took that hammer, and I took a knife, and I wrought ruin on my own face. When the bandages came off I was unrecognisable, one more scarred veteran of a bitter civil war. And so I was able to return to the capital, to serve in the machine shops as a lowly labourer.

At night, I smuggle parts from the shops to my lair in the sewers. I am building a new machine, using what I learnt from the Turk. This one will show me how to start a revolution we can win. It will lead the survivors out of the hills and the serfs out of their bonds. It will lead us to freedom.