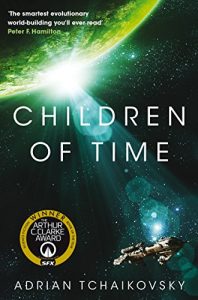 Adrian Tchaikovsky’s award-winning novel Children of Time breaks one of the most common rules of good fiction. It’s a book that wouldn’t have worked without breaking that rule and which gains much of its power by breaking it. As such, it makes an important point about “rules” of writing and how they work.

And did I mention that it’s a damn good read? Because that’s going to be relevant later…

Adrift in Time and Space

Children of Time is set in the distant future. On a planet far from our own, scientists prepare an experiment in evolution. But just as they’re about to trigger the process, political dissent tears society apart. The experiment starts, transforming a planet, but not in the way the scientists planned.

Countless generations later, the desperate survivors of a dying Earth approach the planet. There they find a civilisation of highly evolved spiders protected by a technological ghost. As both humans and spiders struggle to make sense of their worlds, the stage is set for a dramatic clash of civilisations.

One of the great joys of reading Children of Time is learning about the spider civilisation. As usual, Tchaikovsky brings a flair for invention and extrapolation, creating a society that makes sense but is utterly different from our own. Communication, social structures, technology, all are very different from those of humans. As the book progresses and the spiders evolve, they keep getting stranger and more fascinating.

To let us understand this society, Tchaikovsky often has to explain aspects of the spiders’ lives. From political changes to new inventions, there’s something to reveal in nearly every spider chapter. While some of this is shown through the spiders’ actions, we’re flat out told about much of it.

This goes against one of the most common pieces of advice given to new writers – “show don’t tell”. We’re taught to use action and implication to let readers work out what’s going on. It’s helpful advice, as it makes more engaging prose and lets readers feel smarter as they read. So how has a book that tells so much become a best-selling, award-winning, much-beloved success?

One answer is that this book needed to tell. The appeal of the spider civilisation is how it works. To show this without telling would take hundreds more pages. It would be a drag on a tense and thrilling novel. A few paragraphs of explanation set the scene to let us get into the action.

Tchaikovsky’s skill as a storyteller plays a part. Sure, the explanations stand out as more expository than in many books, but they’re still a good read. He understands how to make this interesting.

But behind all this lies another issue – the limits of “show don’t tell”.

Writing involves telling. Any time we “show” a piece of information in a story, we do so by “telling” other things. To show that a character is upset I have to tell what he looks like and what he’s doing. To show that someone is smart I have to tell you about a clever thing she says or does.

In this case, telling us how the spider civilisation had progressed shows us that it is advancing. Telling us about individual social and technological developments shows us the outline of evolution in action.

It also gives us the knowledge to understand what later actions will show.

“Show don’t tell” is invaluable writing advice. But asChildren of Time shows, it’s context dependent. What you show, and what you tell to show it, depends upon the story. As Terry Pratchett said, rules are there so that we think before we break them.  Good writing follows the rules. Great writing knows when to break them.