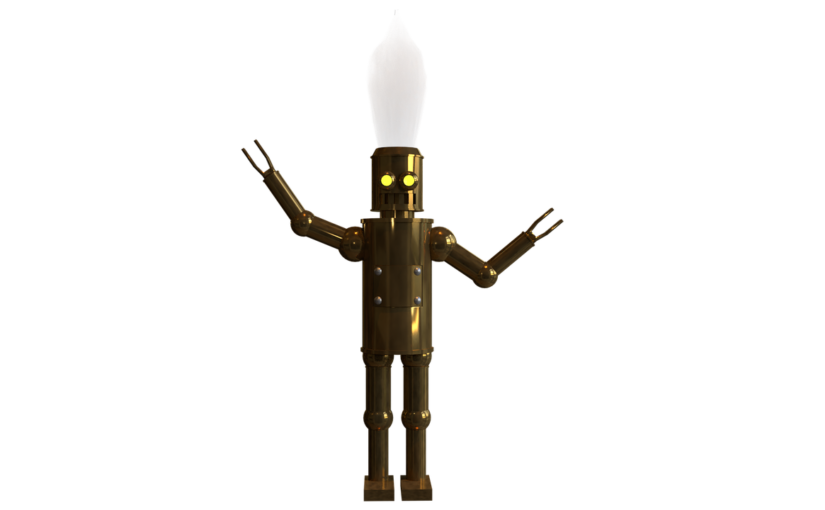 Derisive laughter filled the hallway of the Taverwell Academy for Gentlemen, rattling like broken gears in the ears of John Blake. He blushed and pulled up the collar of his second-hand tailcoat, while leaning away from Pounder, his personal automaton, as if a few extra inches could distance him from humiliation.

“I mean really.” Oswald Cheadly-Smythe strode up to Blake, trailing half a dozen obsequious sons of aristocrats and their modern, perfectly formed mechanical servants. “Did it come free with your scholarship?”

Blake shook his head and kept his gaze on the floor. There was no guaranteed way to shake of the likes of Cheadly-Smythe, but silence was a safer bet than defiance. Another fight would only lead to a stern meeting with the headmaster, who looked upon the son of his old friend Lord Cheadly-Smythe with avuncular consideration, and upon scholarship boys as a necessary evil.

“It doesn’t really look like anything, does it?” Cheadly-Smythe tapped one of Pounder’s mismatched arms. “Just a bunch of scrap thrown together.” He paused for his entourage to laugh. “Is that the only place you could find a servant, Blake, off a refuse heap?”

More laughter. Blake’s cheeks burned. It was all too close to the truth. His father and aunt had assembled Pounder out of pieces left behind when they repaired other people’s automatons, as well as broken machines abandoned by the nearby mine. One hand had originally been made to dig coal, the other to shape ceramics in a factory. Neither had the delicacy of the other boys’ servants. Blake’s father had been sure that any automaton would be better than having none at all in a place like this, but Blake lived with the crushing truth that, without the money for new clothes and machines, there would be no fitting in at the Academy.

“Well Blake, am I right?” Cheadly-Smythe leaned in, a nasty grin on his face. “Are you being followed around by rubbish?”

“He’s going to look better,” Blake said, desperately clutching at hope. “After I paint him.”

“Who paints their own servant?” Cheadly-Smythe’s laughter was like a storm, waves of noise crashing in upon Blake. “And you really think that paint could save a wreck like this?”

Cheadly-Smythe knocked his fist against Pounder’s chest plate, its surface uneven from where the dents had been beaten out. A trickle of steam ran from Pounder’s shoulder joint, a deliberate design Blake’s aunt had included to keep Pounder’s pressure steady, but that looked like the leaking of a broken machine.

Blake sighed and looked Cheadly-Smythe in the eye. “You win. Your machine’s better. Now please leave me alone.”

“Who even made this thing, some east end junk dealer? They should be ashamed of themselves, putting such a monstrosity into the world.”

Blake’s father and aunt had worked for months building Pounder, while his mother took on extra sewing so that she could buy him a second-hand uniform. His family had dedicated themselves night and day to sending him here, the only lad in his town to escape the pits. They had poured their hearts and souls into that work, and looked so proud as they sent him away.

“What did you say?” Blake narrowed his eyes. His heart was beating faster. He mustn’t hit anyone. If he did that again it would mean expulsion, and the shame of explaining that to his family.

“I said that this rust bucket is utter trash,” Cheadly-Smythe said, leaning in close. “And so is anyone who had a part in making it.”

“My father made that machine.”

“Of course. Trash from trash. How fitting.”

Blake’s whole body shook. He clenched his fists as he drew ragged breaths. Cheadly-Smythe stared at him in delight.

“Go on,” Cheadly-Smythe whispered. “Show me what you’ve got.”

Cheadly-Smythe’s automaton stepped closer, so that it stood facing Pounder, the sleek, pristine servant inches from the cobbled together industrial machine.

A hand made for shovelling coal slammed into Cheadly-Smythe’s servant, gouging open its chest plate with a scream of rending metal. The hand struck again, tearing out pistons and pipes. Steam spewed, sending the schoolboys scurrying. A third blow, out the back of the chest, and the broken automaton fell with a resounding clang.

“That’s what I’ve got,” Blake said, beaming with pride at what his family had made. He glanced at the slack-jawed students, then turned back to Pounder. “Come on, mate. We’re going to be late for class.”