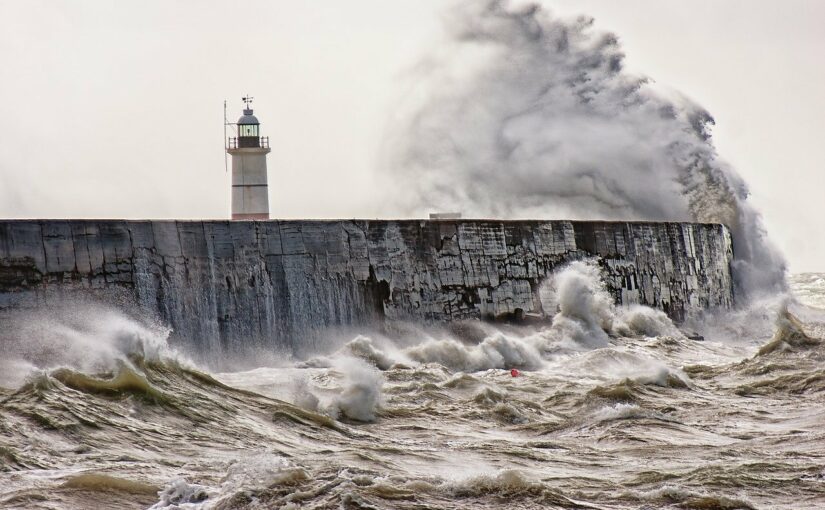 A rumble emerged through the howling wind off the sea. Half a mile down the coast, the cliff face fell, ancient stones tumbling as waves surged up and swallowed them.

Eamon’s fingers trembled as he tapped at his tablet. Rain ran down the screen, down his face, down the road in rushing rivulets that grew stronger by the hour. This storm was the worst yet and it was still rising.

A swarm of insectile robots scurried across the new sea defences, the ones Eamon had raised after the harbour was abandoned. The signs of his failure appeared and disappeared as the waters rose and fell: the broken walls of houses, the shattered windows of drowned shops, even the stumps of wind turbines out to sea. But this time he wouldn’t fail. He couldn’t fail. This was what he did. He was Eamon, and he saved the town.

“Eamon, we have to go!” Hannah grabbed him by the shoulder. Behind her, a lorry stood outside their house, one of the last to be evacuated. A neighbour was climbing into the cab, while another slammed the rear shutters down, and a third started up the car.

He squinted as the storm blasted his face, and made another adjustment to the robots’ instructions, sending them to reinforce the new sea wall. As they moved, a wave rushed up and snatched two of the robots away. A third landed on its back, legs twitching broken in the air. Eamon ran towards it, but Hannah grabbed him around the waist, and others joined in, dragging him back as a chunk of concrete blew out of the wall.

“There’s nothing left to save,” Hannah shouted over the wind.

“That’s my house!” Eamon said. “Our house. And Sammy’s house next to it. And a dozen more. We can still save them!”

Rain ran down the road where he had played as a child, carried away the dirt of his father’s flower beds, streamed across the front step where his mother had sat with him every summer morning, talking about what the town had been back in its fishing days, about what it could be again.

Now his parents were gone, along with everyone else buried in the cliff top parish graveyard. But the house was still here, as solid as his mother’s faith in him. If it fell, that would be on Eamon.

“I love this place too,” Hannah said, tears running with the rain down her cheeks. “You think I would have come back to teach in our old school if I didn’t? But the town’s like that school, half into the ocean and the rest about to follow. You have to accept that. Better heartbreak than death.”

Down the hill, waves crossed the broken sea wall and thrashed against the front of the souvenir store from Eamon’s tourist boom, against the arts centre whose funding he had found, against the estate agency he had coaxed back as house prices rose. His mother had been so proud.

“I knew you could save us,” she had said.

He tapped at the screen, sent the robots swarming to the gap in the sea wall. They clung to each other to stop the waves washing them away, while some extruded polymers to close the gap, to hold it together until the storm passed. They became a single mass, a part of the wall that buckled but didn’t give way. They were Eamon’s spirit, bending but unbroken.

Further down the sea wall, the concrete cracked and the water poured in. There were no robots left to plug that gap. The tablet hung in Eamon’s hand, a cold dead weight of useless electronics.

“I’m sorry.” Hannah wrapped her arms around him. “But please, for me, you have to come. You’re all I have left of this place.”

“No one could have—”

“I failed!” The words were a howl of anguish. The tablet shattered as it hit the ground.

“Yes, alright, you failed here! But look at how much you learnt along the way. Imagine how much more you can achieve if you start working with others instead of trying to do everything on you own.”

“Not this town. Not any more.”

The waves were surging up the street. The wall of the souvenir shop collapsed and its roof followed, tiles and solar panels sliding over each other into the water. Another chunk of the sea wall fell, taking Eamon’s robots with it.

“As long as we live, so will this place,” Hannah said, pressing her hand over his heart. “And who knows what other towns you could help save.”

Feet dragging, Eamon let her lead him to the car. As they drove away, he looked back through the window, watching his house disappear into the haze of a rain-drenched twilight. He remembered his mother on the doorstep, on her sickbed, in her coffin. Eamon trembled, and finally began to cry.