A lot of science fiction and fantasy uses elements from the crime genre, especially the classic murder mystery. From Douglas Adams’s Dirk Gently’s Holistic Detective Agency to James S. A. Corey’s Leviathan Wakes, it can provide a solid central plot. A mystery keeps up the tension. It’s very familiar, making the story accessible whatever its more unusual parts. And as a writer, it’s a handy formula to spin something new out of.

Some recent sf+f murder mysteries have shown a change in how this is used, a change that’s arguably for the good.

The traditional murder mystery has an implicitly conservative ideology at its heart. Good order is disrupted by a death. The villain is a disrupter, the hero a restorer. Victory comes through a return to normality, without what passes as “normal” being questioned. In an Agatha Christie book or an episode of Law and Order, good moral conduct lies in keeping the world safe, not making it better.

There have always been exceptions. Christie’s own And Then There Were None (or whichever of its titles you prefer) can be read as a critique of this approach, a story in which murder brings justice. But it wasn’t common for a crime story to become popular while challenging social structures. That is until The Wire, David Simon’s extended crime drama and critique of a broken America. The Wire argued strongly for social and political change, showing that the world the detectives defended, the order they were tasked to restore, was inherently broken. To do good was to change the world, and protecting the existing order could do as much harm as good. Its heroes had to balance the interests of security and transformation.

To call The Wire influential would be an understatement. Its spectacular critical success has had a huge impact on television and the telling of crime stories. Traditional stories are still common, but the interest in less conservative crime dramas has grown.

The problem for anyone writing such a drama is that the real world won’t be changed by their fictional criminals and detectives. If they start changing the story world, it won’t look like our reality any more, and that won’t work for readers expecting mysteries grounded in the real world.

Science fiction and fantasy worlds are already different from ours and their fates can be shaped by the writer. It’s an expected part of the genre. So criminal cases can have huge social and political repercussions that ripple through future books. The forces of order can also be the forces of change.

You can see this in two recent stories.

Anthon Johnston and Justin Greenwood’s comic The Fuse is set on an orbiting space station in the near future. The first case of this ongoing series propels a pair of detectives into a situation with far-reaching political consequences. It promises more disruption to come.

R J Barker’s novel Age of Assassins has an assassin as its protagonist, and one of the book’s many beautiful ironies is that a killer is the one to investigate a death. In doing so, Girton Club-foot becomes caught up in palace intrigues, unleashing a series of events that may make his world a very different place.

It’s fun to see genres renowned for their conservatism combining to put forward a radical proposition – that crime isn’t just an isolated aberration, but that it can reflect the deeper troubles of a society. That its unravelling both can and should lead to transformation, not just the restoration of the status quo. But that’s the argument many post-Wire murder mysteries put forward. It’s an argument implicit in both The Fuse and Age of Assassins. It’s an argument that holds out hope for change, and shows that we can protect society while critiquing it.

In a world already bucking against broken norms, maybe it’s an argument we all need. 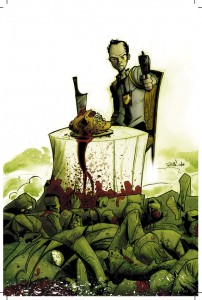 bitter-sweet about getting to the end of a great story. You get the pleasure of completion and of seeing what clever finale the creators had planned. But on the other hand, it’s over. No more of this. The end.

Chew, one of my favourite comic series, just reached its finish. It was as ending that came out of everything that came before. It was powerful and striking and utterly bonkers. It was the perfect finale to this excellent series.

I’m sad to see it go, but pleased that I got to see the end. And the other sweet side of this is seeing what John Layman and Rob Guillory will do next.

If you haven’t already, go read Chew. The whole story is there waiting for you now.

And if you have a favourite ending – bitter, sweet, or a bit of both – let me know what story it was in the comments below.