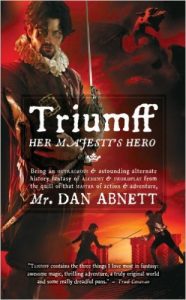 Don’t get me wrong. I love books of depth and passion, like the work of Guy Gabriel Kay. I like books of intelligence and extraordinary ideas, like those of China Miéville. But sometimes I just want a fun romp.

And as fun romps go, Triumff – Her Majesty’s Hero by Dan Abnett is nicely bonkers.

Swashbuckling adventurer Sir Rupert Triumff has just returned from a voyage to Australia. Ethical concerns are holding him back from sharing details of his discovery with the world. But as he mulls over the problem, a conspiracy is at work. Soon Triumff will be caught in its tangled web.

As the Book Smugglers pointed out in their review, this is a book where plot trumps character. There are a lot of fun characters here, but none are explored in great depth. Triumff himself is a classic swashbuckling rogue. His opponents are megalomaniacal ciphers. The people he works with all stand out from each other but develop little depth.

On the other hand, it’s a lot of fun. The setting is a bonkers mash-up of details from different periods and pop culture jokes. Things keep moving at a good pace, with just enough breathing room for the reader to take it in. This… well, it’s fun.

If you’re looking for a light, exciting adventure to relax with then this is a good choice. It’s a setting that’s distinct from anything else I’ve encountered, and for all their shallowness the characters are fun. There’s some weird stuff going on with the narrative voice, which for me added to the playfulness of it all.

If you want a fun read, you could do far worse.