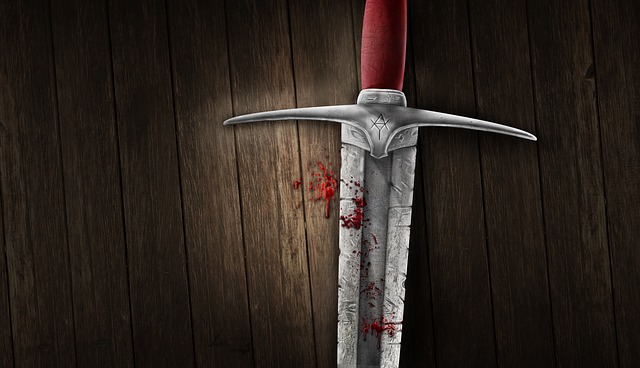 “Acwellen, the Reeve is here to see you.”

, my sister, delivered the news from the door of my hut, well away from where I sat sharpening Holt’s sword. It was the sword he’d wielded against the Danes. The one he’d left at home on the day he was murdered. Maybe if he’d taken it with him then I would still have had a husband, or maybe I just wouldn’t have had a weapon to avenge him.

“The Reeve can fuck off,” I said, spitting into the dirt. “I’ve business to attend.”

“I don’t think he’ll do that,” Diera said, looking over her shoulder. “And he didn’t come alone.”

“Then he can fuck off in .” I ran my whetstone down the edge of the sword, the sound ringing around the hut.

The room grew lighter as left the doorway. I kept at my work.

“Mistress Acwellen, may I come in?”

I Faran’s face, having seen him in passing at local markets, and of I knew his name. of mine had often gone to the reeve with disputes and questions about tithes, but this was the first time he had come to our village.

Faran stayed in the doorway, watching the whetstone as I ran it up and down the blade.

“It’s up to you who comes into your home,” he said. “But it’s up to me how criminals are punished.”

“We dealt with these things ourselves before the king made his new laws. We can deal with them now.”

“If not for King Alfred, you would still face raids by the Danes. This village might not be standing. Is law and order such a high price to pay for peace?”

“Yes!” I leapt to my feet and pointed the sword at him. “When that law gives you the right to tell us how we live, that price is too high.”

“I’m not telling you how to live. I’m just asking you not to kill, to take the blood money instead and use it to raise your children. Surely that’s better for them?”

I stormed across the small room and shoved him in the chest. He was a big man but I was strengthened by anger. He staggered out into the mud in the middle of the village and I followed, sword still in hand.

“You want my children to know that their father’s death goes unpunished?” I snarled. “To know that others could get away with murder? You think that’s good for my children?”

“Better than another feud.”

Now he was outside, watched by his own men and a score of villagers, Faran stood his ground, arms folded, as I glared up at him.

“You know how it goes,” he said. “Cerdic killed Holt in a drunken fight, so you go kill Cerdic. But then Cerdic’s brother wants vengeance, so he kills you. One of your friends hunts the brother down, only to be slain in return, and on and on until half this valley is red with blood and there’s no-one left to raise your children. Holt’s children. Is that what you want?”

When I was young, there had been a feud between two villages the far side of . A dozen dead, some of them people my father had traded with, all because someone was careless while out hunting.

I stepped back, cradling the sword to my chest, unable to look him in the eye.

“Come with me,” he said. “Accept the blood money. Buy your children warm clothes and good food to see them through the winter.”

We stood for a long time, Faran waiting for my response.

The sword was a steady weight pressing against my thigh. I kept my hand gripped around the pommel, something comforting of Holt’s. Faran, standing beside me, watched from the corner of his eye.

“Here.” Cerdic held out the bag of coins to Faran. “It took a while, but this is all that you demanded.”

“That the law demanded,” Faran replied. “And it goes to Acwellen.”

Cerdic took a deep breath and turned his attention to me. My hand tightened on the pommel. He flinched, looked nervously at the sword, and finally held out the bag to me.

It would have been so easy to draw the sword, to cut him down then and there. What better chance would I get? How much better would the world be without him?

I let go of the pommel and took the bag. It was heavy, more coin than I had ever known. Enough to see us through many winters.

I turned away and started walking down the valley, the king’s reeve following me, my heart heavy and my hands full. Tears streamed down my cheeks.

We were all paying the price of peace.