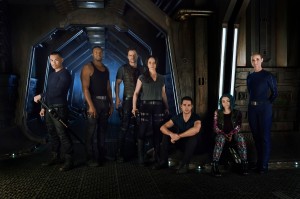 Six people wake up on a spaceship. None of them remember who they are or how they got there. As they struggle to survive in a dangerous universe, they only have each other to rely on. But when all they know is that one of them wiped their memories, how can any of them trust each other?

With a premise like that, Canadian show Dark Matter brings something new and interesting to the sci-fi TV table, raising questions of identity, morality and purpose. But I’m going to focus on the thing that’s most familiar about it – the bickering spaceship crew.

TV space-based sci-fi usually follows a similar format. The crew of a spaceship travel from adventure to adventure, getting to know each other along the way. In the most interesting cases – Farscape, Firefly and now Dark Matter – that crew doesn’t get along. More separates them than binds them together, leading to constant bickering. There’s at least one repugnantly selfish character – Rygel and Jayne spring immediately to mind. Even the other characters aren’t the most morally upstanding citizens – Farscape revolves around a band of escaped prisoners, Firefly a band of career criminals who slip into legal business only when it pays better. By the end of the first episode of Dark Matter, it’s clear that this crew, before their memories were wiped, were the worst of the lot. These aren’t shows about nice people with a noble purpose.

So why does it work?

Conflict and the Crucible

In his book Solutions for Writers, Sol Stein talks about the crucible, the situation binding a group of characters together, forcing them to keep interacting with each other. It can be something abstract like a shared interest, or something more substantial, like living in the same house. What matters is that the crucible has enough impact to keep them together despite their differences.

Characters in conflict are always more interesting than ones who gently get along, but that conflict can be problematic. Why do Heidi and Jo keep spending time together if they hate each other’s guts? In ordinary life they’d probably avoid each other, but the crucible prevents them from doing this. The stronger the conflicts, the more forceful the crucible needs to be.

Hence the bickering crews of outsiders. Being on a spaceship together, and on the out with the law, forces the characters to interact and even to cooperate. That lawlessness gives them a shared purpose, as well as the sort of character traits that lead to conflicts. In Star Trek, conflicts within the crew were mostly low key, and that fits the crucible of a large professional spaceship crew in a large space faring organisation – if they got on really badly, they’d just get posted to different ships, and Kirk or Picard could fire anyone who was a total chump.

The bickering outlaws are more exciting than the good guy professionals, and their spaceship provides a crucible to keep them together. Until somebody tops that magic formula for tension, we’re likely to keep seeing these shows. And given their quality so far, that’s no bad thing.