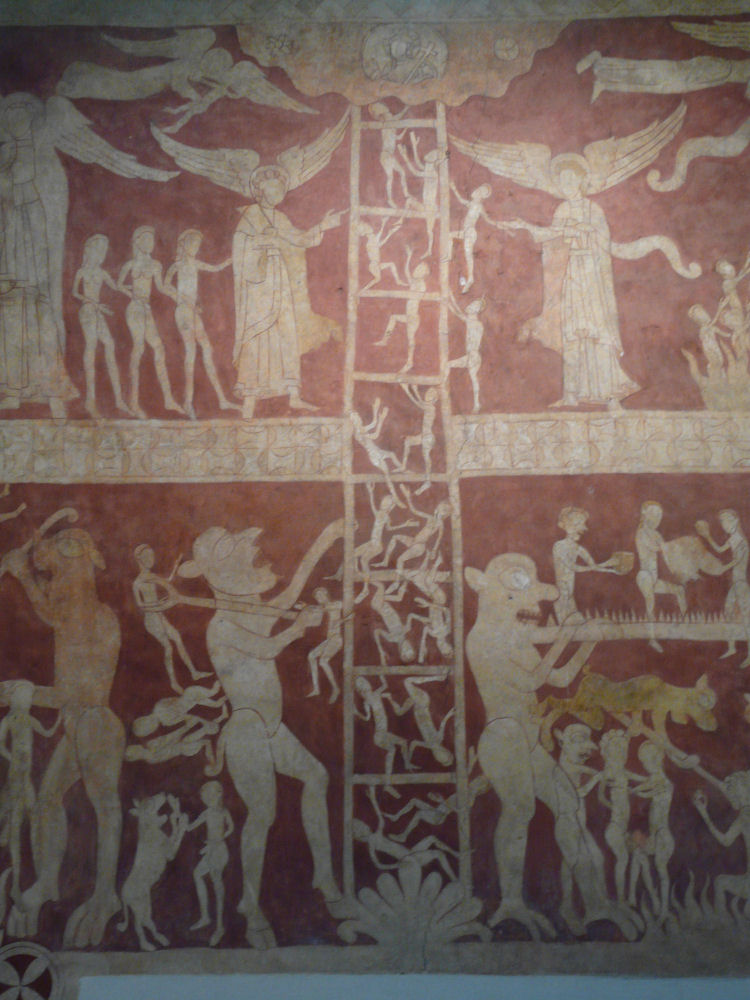 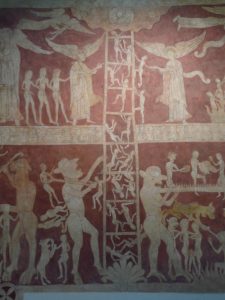 Thomas drew his brush across the wall, leaving a curve of thick red paint. He filled out the space beneath the curve, then added the white points of teeth and the black barbs of a pitchfork. Another demon emerged on the wall, ushering the pale images of sinners into the flames.

Thomas shook his head. Doomsday paintings were so much of his work. Every noble wanted one in their house. But just painting them filled him with dread, driven by the certainty that he would be judged and found wanting.

He mixed more paint on his palette and turned back to the wall. The paint had clearly run, as the new demon’s fork was pointing at a different sinner, and another of the beasts had approached the flames on pigment wings.

Disconcerted, Thomas took a step back. The composition would still work if he added another demon between these two. He brought his reddened brush to the wall.

The demon with the pitchfork tipped its head back.

Thomas screamed and dropped the palette. Precious paint-spattered the flagstones.

The demon grinned. Its companion flexed its wings and started pulling away from the wall, struggling against a sticky mass of paint.

He raised a trembling hand and slapped himself across the face. He did it again, but still, reality didn’t return.

“No dream,” the demons hissed as one. “You have given us life.”

Thomas grabbed another brush and smeared streaks of white across both fiends, slapping it on over and over. At last, he stood, panting and staring at a pale blank space.

“Not so easy,” the demon voices croaked.

Red hands appeared, then heads, then torsos. The demons emerged like swimmers from a lake.

“We are still here, whatever you paint over us,” they said. “You made us real.”

Thomas gaped in horror. How had he done this?

It didn’t matter. What mattered was that he could do it. He picked up the black brush and painted a cage over the demons. Bars, floor, roof, hinged and locked door. Red wings batted against the sides in frustration.

It thrust its pitchfork between the floor and bottom of the door. There was a grinding noise as the prongs slid through the slim space. Then it flexed its muscles and heaved. Levered by the pitchfork, the door lifted off its hinges and fell to the floor.

The demons stepped out.

“It’s not fair,” Thomas wailed. “Why couldn’t this have happened when I was painting a landscape or a tavern sign?”

“Where is the power in those things?” the demons said. “Only we would do.”

“What do you want from me?”

“Just keep painting,” they said. “Let the fires roar and our kindred emerge to judge the world.”

Thomas trembled in terror. But then he realised, he didn’t have to face them. He turned to run.

With a wet flapping sound, the winged beast burst off the wall, swept around, and hovered in front of him, teeth bared, claws gleaming.

“Really?” it said, cackling. “You think you can flee us?”

Brush in hand, he turned back to the wall. At least while he did as they asked, they would not drag him down to Hell. And he could paint demons for a very long time.

People in Medieval England were very aware that, according to their Christian faith, they would soon face Doomsday. When fear of Hell is a big part of your moral motivation, life can get pretty terrifying. Especially given the tendency of clergy and nobles to commission paintings of that coming day.

Thanks to Laura for sending me the postcard that inspired this story. If you enjoyed it, then you might want to sign up for my mailing list. You’ll get a flash story to your inbox every Friday, as well as news about my book and comic releases.