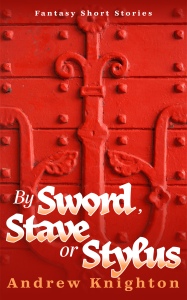 Detective Shadowvalt curled his tail up beneath him and pulled the hood of his jacket forward, covering his horns. He didn’t like to leave his trenchcoat behind, but at least he could still smoke while undercover. Lighting a cigarette, he enjoyed the smooth, sulphurous taste. He was sure the cigarettes tasted better in Hell.

Shoulders hunched, he stayed with the dozen lost souls walking through the barbed gates of the warehouse, past the watch demons guarding the place. Even before they crossed the yard, he could tell by the smell that this was it, the centre of the supposed people smuggling ring. There was an acrid tinge in the air, the smell of fallen spirits being consumed for others’ purposes.

Still following the damned, he walked through the double doors of the warehouse proper. At the far end a yellow demon with six tentacles stood by a stone gate. The air in the portal glowed blue with arcane power as a soul stepped in and vanished.

Seeing what was really happening made this all the more sickening. There were scores of mortals here, and they probably all thought they’d bought a way to freedom.

That was it. Probable cause to raid the place. He needed to fetch backup.

Shadowvalt turned and bumped into one of the watch demons.

“Not this way.” The demon blinked six of its eyes. Others emerged on writhing stalks, peering under Shadowvalt’s hood. “Hey, you’re not a mortal. You’re a-”

Shadowvalt flicked his cigarette into the demon’s face. It yelped and jumped back as he flung back his hood and pulled out his badge. “Police. Nobody move.”

The watch demon grabbed at Shadowvalt. He punched it in its sensitive, eye-covered head, sending it slumping to the ground in shock and pain.

“You want out of here?” the yellow demon bellowed, gesturing toward the portal. “Kill him!”

The lost souls, still bearing the marks of their deaths as well as their eternal torments, looked at each other in confusion. They’d probably never been told to attack a demon before. But they were desperate, and Shadowvalt new all too well what desperation could achieve.

They advanced toward him, fists clenched, eyes wide.

“Stop!” he bellowed. “You’ve been tricked. That’s not a portal out of Hell. It’s a construct to turn souls into power. They’re going to kill you.”

“Why should we believe you?” The soul who spoke had burns across half her face.

“Because this is a battery factory.” Shadowvalt pointed to the wires leading away from the portal, ending in a charger against the far wall. “What do you think we use down here, Duracell?”

They looked back toward the yellow demon. Clearly a specialist in technical arcana rather than convincing lies, it hesitated too long. Some of the souls sank to the floor in despair, while others rushed at the demon in rage.

They’d never win the fight, but it was enough. With everybody distracted, Shadowvalt stepped outside and over to the gates. He waved down the road, toward the abandoned building where his backup was waiting. Uniformed constables poured down the street toward him, horn tips gleaming, as the burned woman came up beside him.

“It’s not fair.” She spat the words. “All we wanted was to escape torment.”

“If you’d acted fairly you wouldn’t be here.” Shadowvalt lit a cigarette. After a moment’s hesitation he offered her one. “Just be glad I didn’t leave you to walk through the portal. I’d say justice has been served.”

You can read two more of demon detective Shadowvalt’s cases in my fantasy anthology By Sword, Stave or Stylus, which is free as an ebook on Amazon until Tuesday. You can also read another flash story about him here.

If you enjoyed this story then please share it – the more people read it the better. And feel to share your opinions below, as well as any ideas for future flash Friday stories.

A prisoner haunted by ghosts, or are they shadows?

A demon investigating an angel’s death.

Action, art and mystery all feature in my fantasy short story collection, By Sword, Stave or Stylus, out today as an ebook today via Amazon and Smashwords.

The stories in this collection:

It’s an eclectic selection of stories, and one I’m proud of. So if you’re looking for some reading why not go pick up a copy from Amazon or Smashwords. It’s only 99c for the first two weeks of release, after which I’ll be putting up the price to a princely $2.99.

And later in the week, once I’ve stopped reeling from the excitement/nerves of hitting the magic ‘publish’ button, I’ll discuss some of the stories in more detail.

Detective Shadowvalt flicked his tail restlessly from side to side, his trench-coat flapping with it. Coming into churches always gave him the creeps – too many items that could be used to hurt or to banish him. And old churches like this, their grey stones soaked in a thousand years of faith and desperation, they were the worst.

Its secret sanctification to Hell only just took off the edge.

He ground his cigarette out beneath his hoof, was amused to see a look of outrage cross the face of the Reverend Green’s husband. What sort of person suffered such a petty feeling when his wife was freshly dead in front of him? Or wore a brown jumper and slacks, for that matter? Sometimes humans were just too funny.

Shadowvalt peered down at the body in its priestly vestments. Bullet hole in one temple. Brains spattered across the pews. Gun in hand. Could it really be that simple?

‘Um, excuse me?’ The grey-haired lady was Mrs Welby, the head of the local Women’s Institute. Apart from the Reverend and Mr Green she was the only person on church grounds when the death took place. She was apparently fighting down fear in favour of an old-fashioned calm. ‘What are you doing here?’

‘Hell takes care of its own.’ Shadowvalt glanced at both humans. Neither seemed shocked at his claiming a shared allegiance with the late Reverend Green.

‘Like gangsters take care of their own?’ Mr Green’s voice was hollow, broken.

‘Sometimes.’ Shadowvalt lit another cigarette, waved PC Griddlenotch in from the back of the church. ‘Let’s deal with the obvious possibility first.’

Griddlenotch had a sniffer imp on a chain, the little creature’s skin shifting from green to a sickly brown as he led it down the aisle. The constable stood picking one of his noses while the imp sniffed around the body, its skin changing once more, this time to a glaring yellow.

‘That means it smells fear,’ Griddlenotch said, yanking the imp back as it starting gnawing on the corpse’s ear.

‘Depression’s more a sort of blue-grey.’

‘Not suicide then.’ Shadowvalt wasn’t surprised. Handguns weren’t easy to come by in middle England. There were far easier ways out.

He turned to Mrs Welby.

‘What were you doing on church grounds at ten at night?’ He leaned forward, deliberately exuding a cloud of sulphur to keep her off guard.

‘Flower arranging,’ the old lady replied. ‘For the Harvest Festival.’

Shadowvalt nodded towards the half-assembled arrangement on the pew beside her. It was riddled with poisonous berries, bound in tangles of Japanese knotweed.

‘That’s a dark sort of arrangement,’ he said. ‘Only an expert flower arranger could pick them so well.’

‘And only a minion of my dark master would make those choices.’ Shadowvalt watched her face fall before continuing. ‘How senior were you in the local cult? Second in line? Making you the leader now, I suppose.’

‘Please.’ Mrs Welby fell to her knees, hands held out in front of her. ‘You’re right. Take me. Take me away to Hell to face our dark master.’

Shadowvalt took a deep breath. If there was one thing he hated more than a sycophant it was a stupid sycophant.

‘You do know that the fate of His loyal minions is different from that of murderers sent to the Pit?’ he asked. ‘Some people operate the racks, others are strapped to them.’

‘Oh!’ Mrs Welby smoothed down her floral print dress, eased herself arthritically back into her seat. ‘Then it wasn’t me. I was in the vestry, making offerings of blood. You can ask by demonic supervisor.’

Shadowvalt turned to Mr Green. He was staring in despair at his wife’s corpse, his face pale, hands trembling. Unlike Mrs Welby, who now seemed fascinated by the bloody sight, he was clearly in shock.

‘How long have you known that your wife was a Satanist?’ Shadowvalt asked.

There was a pause while Green realised that someone was talking to him and then looked up, blinking as he processed the question.

‘Since yesterday,’ he said at last.

‘You believed didn’t you Mr Green?’ Shadowalt asked. ‘In what she preached publicly, the Christianity she claimed to hold dear?’

‘How did it feel, knowing that her heart belonged to someone else?’ Shadowvalt leaned in closer, staring into the man’s eyes.

‘I could cope,’ Green said, tears running down his cheeks. ‘When I thought that she loved God more than me, I could live with that. But this… Him… You…’

His face turned from sorrow to rage. He jerked to his feet, glaring at Shadowvalt.

‘This is sick! This is wrong! This is not the woman I loved!’

‘Yes!’ Green practically spat the word. ‘She betrayed me. She betrayed him. And so I… So I…’

He looked down at his dead wife. Sorrow once more crumpled his face.

He sank back into his seat, sobbing like a child.

Shadowvalt had his answer. He turned and walked off up the aisle.

‘Wait!’ Mrs Welby called out after him. ‘Aren’t you going to arrest him?’

‘A Christian kills his secret Satanist wife, in a church, with a weapon of modern secular industry?’ Shadowvalt laughed bitterly. ‘This one will be a complete jurisdictional mess. I’m leaving it to the locals.’

He lit a cigarette and, with a huge sigh of relief, stepped out of the church and into the night.

Demon Detective Shadowvalt fights more unholy crime in ‘The Suspicions of Shadowvalt’ and ‘The Faces of the Fallen’, both in my collection By Sword, Stave or Stylus. It comes out on Monday and is available to pre-order now on Amazon and Smashwords.