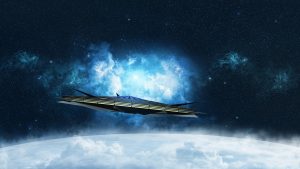 We spend so much time thinking about the meaning of the words in books, it’s easy to ignore the way that they look – the role of fonts.

Something gothic and ornate like Blackadder can give text an aura of age and mystery, but it makes reading harder and draws attention to the design over the meaning.

Helvetica on the other hand is so easy to read and ubiquitous that you tend to forget that it’s there, unless you’re a graphic designer enraged at the bland repetitiveness of seeing the same font wherever you go.

Times New Roman is still the default in many places, probably because humans get so nervous about change. That said, as an author I usually have to submit manuscripts in Courier because, ugly as it is, it’s what editors have used for decades and so what they expect.

Unlike TV shows, we tend to think of books as the work of a single creator. But thinking about fonts pierces that illusion. A book is normally a combined work. The author might have put in the most hours, but the editor, the cover designer, whoever lays out the pages, even the person who decades ago designed the font it will be printed in, they all contribute some part to the reading experience.

So here’s to those folks, part of the grand collaboration of reading.