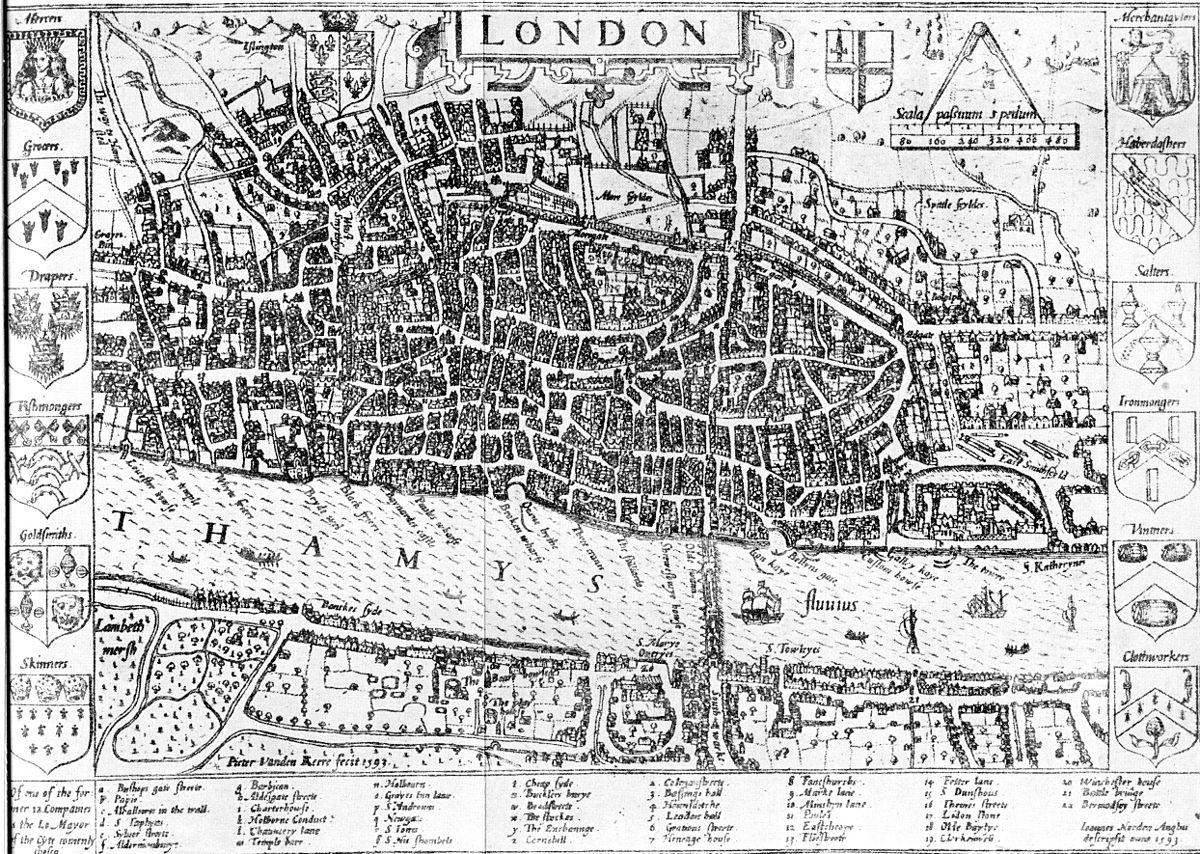 The noise and smell of London’s streets were overwhelming. Carters and traders, street preachers and half-drunk apprentices shouted at each other across roads that ran with rotting refuse. A pamphleteer waved a sheet of printed paper in my face and talked excitedly about how God and Drake had saved England from the King of Spain’s armada. I was about to tell him that I couldn’t read, never mind spare a penny for his wares, but he had already cast an eye over my tattered clothes, drawn his own conclusions, and moved on.

I walked along the street, stopping at every shop and tavern I passed. At each one my question was the same:

And always the same answer – a swift no, often with a look of disdain or with eyes that would not meet mine.

“Then why don’t you have work already?” he asked.

“Things are tough on the south coast,” I explained. “Jobs are scarce. I hoped that in London…”

He shook his head.

“Everyone has high hopes for London. But we’ve all got our business to be about, and I don’t have time to spare for vagrants.”

I slipped away, shoulders slumped, and sat at a street corner while I tried to find the will to continue. As wealthy men passed I held out a hopeful hand, but buying fine doublets had left them all without a penny to spare.

As dusk fell, a group of young men in matching blue livery came striding down the street. One of them pointed and they stopped.

“No money, old man?” they stopped said. I couldn’t have been ten years his senior, by I knew I wore those years like coarse and crumpled cloth.

My heart lifted as they helped me to my feet and led me down the narrow alley between two houses. Then they stopped, surrounded me, and pulled out wooden cudgels.

“Another filthy, lazy vagrant trying to live off others’ work,” the leader said. “Time to teach you a lesson.”

A man loomed over me. He wore a simple tunic and had a mass of wild hair, but it was hard to make out more in the thin lantern light that crept down the alley.

I pushed myself up on one elbow and wiped the blood from under my nose. Even that much movement hurt.

“Why’d they do that?” I asked, bewildered.

“Apprentices, was it? The authorities encourage ‘em. They’ve got more love for those stuck-up pricks than for the gutter-born like us.”

I nodded, which made my head spin.

“Then let me offer you a lesson,” he said as he helped me to my feet. “No-one with power here gives a fig whether you live or die. God’s harsh truth. But the likes of you and me, we look after our own. Head down to the brick kilns in Islington and ask for big hands Davey. Tell him little Bill sent you. He’ll sort you out.”

“Thank you,” I said, so grateful for kindness that I almost cried. “How can I pay you back?”

“Don’t worry about that. It’s between Davey and me.”

“You look like a strong lad,” Davey said in a lilting voice. “Done lots of heavy lifting, have you?”

“Used to bring in the grain,” I said. “But there wasn’t enough work the last few years.”

“Well, we’re after a different sort of harvest.”

There was laughter from the half dozen men and women he’d gathered between a pair of brick kilns. They were a friendly bunch, plainly dressed, many of them visibly scarred. A woman handed me a hefty stick like the ones they were all carrying.

“We’re going to visit a dyer by the name of Roberts,” Davey said. “He’s been making a pretty penny lately, and it’s time to share the wealth. Lizzy and the new lad, once we get in, you head straight to the bedroom and grab his wife – surest way to get his cooperation. The rest of you, see what looks shiny.”

I tried to hide my horror from my new friends. Without them, I was alone in the city.

“Don’t worry, boyo,” Davey said. “We don’t rob anyone who doesn’t deserve it. Think of how they looked at you, what they let those apprentices do to the likes of you and me. This is justice, so it is.”

I took a deep breath and tried to gather my thoughts, but I was hungry and tired and full of pain, altogether too distracted to do anything but agree.

As we crept towards the darkened house, Davey stopped us one last time.

“This Roberts is a strong one,” he said. “So swing clubs first and ask questions later.”

I remembered the apprentices clubs swinging at me, the thud of their boots against my flesh. The stick felt heavy in my hand.

Davey kicked the door open and the gang raced in past him. He turned to look at me, the only man to give me aide or shelter.

The man who wanted me to make me a robber.

I dropped the stick, turned, and ran.

The noise and smell of London’s streets receded as I trudged south. Maybe I’d find harvest work, maybe I wouldn’t. But I would rather starve back home than give in to those streets.

Elizabethan England wasn’t often kind to people who were down on their luck, who flocked to London in growing numbers as economic and social changes caused difficulties elsewhere. And while our protagonist heading home makes for a satisfying ending, it wasn’t a realistic option for many. There’s a reason historians write so much about crime and vagrancy in this era.