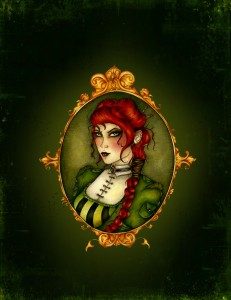 Emily Nation, Alec McQuay’s dark story of family and adventure, shows what a perfect place it is to show characters living on the edge.

The Edge of History

By their nature, post-apocalyptic novels are about living on the edge. The characters struggle to survive in broken cities and barren wastelands. Their societies reflect the jagged outer edge of history, a moment in which civilisation has collapsed, leaving us wondering if it can ever be rebuilt.

That rebuilding is central to Emily Nation. Generations on from a destructive war, the assassin Emily Nation is living in Camborne, a town rebuilt from the ruins. Here, families live lives of relative peace, supported and protected by the likes of Emily. Life hangs by a tenuous thread, and the swiftness with which Emily wipes out her targets is a reminder of how quickly anyone could be snuffed out. But at least the citizens of Camborne are rebuilding with good intent.

Down the road, life in Penzance is very different. Crime lords are rebuilding an economy based on brutality, prostitution, and forced labour. When Emily falls foul of one of these crime bosses, her friends and family suffer the consequences. The peace of Camborne is violated by outsiders, just as a reader’s sense of peace and security is violated by the post-apocalyptic ruins.

Our future balances on a knife edge between prosperity and collapse into McQuay’s speculative ruins. And as the story unfolds, the future Camborne joins us there.

The Edge of Britain

Cornwall is a perfect setting for such a story because it is already a land on the edge. Laying at the south-western extremity of Britain, it is geographically isolated. Even once you get to Cornwall, it can easily take two hours to reach Penzance. Most of the county lies within easy travel of the coast, where rugged cliffs mark the edge of land and sea.

Throughout its history, the people of Cornwall have found themselves living on the economic edge. The food and money provided by fishing are vulnerable to weather and the shifting shoals, fishermen vulnerable to storms. In the tin mines, men literally scraped a living from the dirt, again risking their lives for jobs that could vanish when a seam ran out, and that disappeared forever in the 1980s. The modern economy, dominated by tourism, offers the uncertainties of seasonal work.

This creates a background note of anxiety that matches the breath-taking bleakness of the coastline and its abandoned mines. That anxiety fosters a conservatism that led many in Cornwall to vote to leave the European Union, despite the benefits it brought the county. Living on the edge means living in uncertainty, and that pushes people towards the comfort of a conservative outlook.

The Forward Edge of Progress

This is where Emily Nation takes a different path from its setting.

The book embraces sexual diversity, starting with the protagonist’s marriage to another woman. It holds up alternative family units as just as valid as the traditionally mum, dad, and their own kids. It shows the systemic oppression that comes when desperate people accept desperate jobs, giving cruel economic masters power over them. Racism is exposed in all its hypocrisy through the struggles of mutant miners. The biggest driver for destruction is effectively the arms trade.

The values of the book lie left of centre, at least in a British context. Having a gay female protagonist shouldn’t be unusual, yet is still a radical act, pushing genre fiction towards greater representation. The women in the book are just as capable as the men in exactly the same fields, and it’s not an issue. This is a progressive book that lives on the edge in a positive sense, at the forward edge of current reforms in society and representation.

Like the blade that features prominently in its final act, Emily Nationhas two edges. One is a dark edge, exposing the insecurities that come not only in a post-apocalyptic future but in any part of the world where life and livelihoods are uncertain. The other edge shines brightly, slicing through traditional expectations, joining with other great speculative fiction in trying to set people free.

Sure, this is an action story, one dominated by fights, chases, and explosions. But it’s an action story with a thematic richness, made all the more satisfying by its distinct and evocative setting.