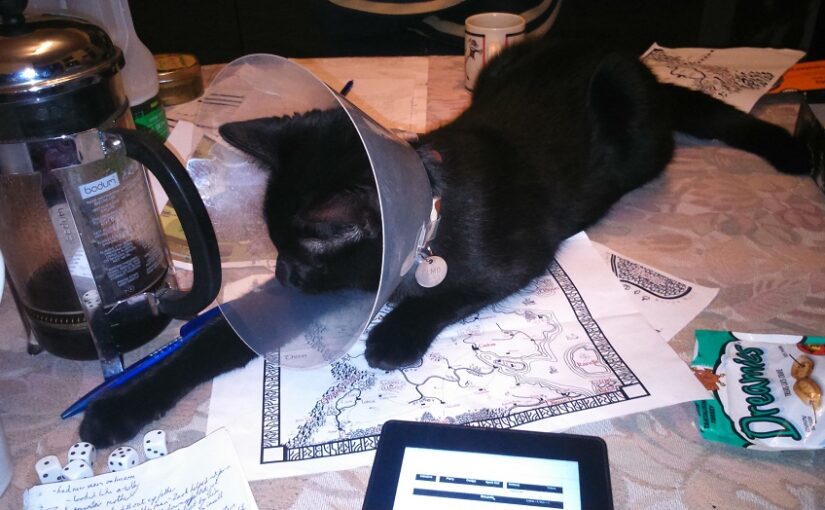 I’ve enthused before about the joys of world-building games like Microscope and Watching the World Die. I love the way that random chance and the structure of a rule set can lead to rich, surprising places that feel organic, coherent, and interesting.

I recently needed to develop the setting for a new story, and as it was set in a city I decided to try out a game designed for this very purpose – Ex Novo by Martin Nerurkar and Konstantinos Dimopoulos.

Ex Novo is simple to play and takes only a few hours. Most importantly given recent circumstances, you can play it solo.  I was creating my city during lockdown, and while my cat does like to play with dice, he’s not so great at urban planning.

Play turned out to be pretty simple. You decide a few basic parameters, including the size and age of your settlement. Then you roll dice and check a couple of tables to determine the terrain it’s founded in and why it’s there. After that, you play a series of rounds in which you roll more dice, look up the results on tables, and add features to the map depending upon those results.

Those randomised additions might sound like a recipe for something disjointed, but that’s not how the game works. Every random choice is both specific and open to interpretation, accompanied by questions that invite you to flesh out the details. Role 325 and you’re adding a new trade route, represented by a resource on the map, but what the resource is, where it goes, who it’s traded with and how, these are all open to interpretation. Just adding that resource to the map creates a relationship between it and other parts of the city, which encourages answers that built on what came before.

It helps that the example game plays a little loose with the rules, in the interests of a better narrative. This encourages flexibility, adding extra details while benefiting from the structure the rules bring.

I’d expected this game to just create a map, but it’s more than that. It creates a history for the city, a history tied to that map. It also creates political factions and develops the conflicts between them, showing the politics and society of your city. As a writer building a setting, that’s incredibly useful for me. It means that my characters have a past to talk about and other people to interact with, enriching my writing.

But the map,  that’s the most useful thing. I don’t normally bother with a map while writing. I might sketch out where named places are compared with each other, for the sake of consistency. But this game has given me districts,  public buildings, surrounding terrain, roads, walls, and ruins. Any time my characters travel from place to place, I can look at that map and get instant, surprising inspiration about what they’ll see.

This sort of game isn’t going to be for everyone, but if you like making up stories and imagining places then it can be a great tool, and with the designers currently letting you name your own price, Ex Novo is a bargain.