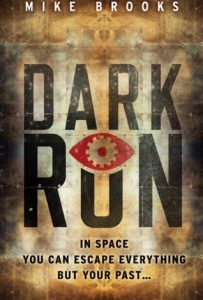 In his book Solutions for Writers, Sol Stein discusses the importance of the crucible – the situation in which characters are trapped together and which turns up the heat on them until something has to give. A well-designed crucible can create the most exciting stories. It traps characters together despite their disdain or hatred of each other, providing plenty of conflict.

A Ship of Outcasts

Dark Run, the first of these books, introduces us to Captain Ichabod Drift and the crew of the Keiko. Theirs is a ship full of smugglers, hackers, and guns for hire. When a figure from Drift’s past offers them a lucrative and clearly illegal job, they take it. But Drift’s past is a dark place and that darkness is about to catch up with them.

The bickering criminal space crew isn’t a new model for a story. Since Farscape and Firefly, it’s been a model many storytellers play with. The internal conflicts of the crew keep things entertaining, their betrayals add twists and tension, and when they work together it’s all the more satisfying because of the differences they’ve overcome.

Dark Run has all that, with the darkness and tension cranked up even further. That isn’t to say that this is a grim book – far from it, it’s an exciting adventure story. But the dark side of the characters and the potential for the crew to just explode keeps you closer to the edge of the seat than ever. It’s a good addition to the cluster of stories that is the criminal spaceship crew.

A Physical and Social Crucible

Why does the criminal spaceship work so well as a crucible for a story?

The reason is that there are really two crucibles at work here – one physical and one social.

Physically, the crew are stuck together in the ship. Even when they have a chance to leave, their ability to find shelter and sustenance is so tied to their beloved rust bucket that it would be hard to get away. Close quarters lead to cabin fever and the revelation of secrets. It’s a great way to turn up the heat.

There’s also a social crucible, one hinted at by the background of Brooks’s character Apirana Wahawaha. Apirana grew up in a criminal gang. Leaving that wasn’t easy and if people from his past see him, including members of enemy gangs who might recognise his tattoos, then it could cause huge problems.

A criminal gang is a crucible in itself. The shared secrets and achievements, the promises kept and threats made bind the members together as deeply as any physical environment. One of the reasons gangs can be so destructive to the lives of their members is the difficulty of leaving.

And the crew of a criminal spaceship are a gang. They are bound together by many of the same social bonds that affect young men and women on the streets. The crew of the Keiko might not share gang tats, but in a sense Apirana has swapped one gang for another.

This is part of why criminal spaceship stories work so well. Physically and socially, they bind together people who may hate each other but can’t escape. You can drive up the conflict without them going their separate ways and the story falling apart.

Dark Sky – Let’s Have Another Crucible!

And then there’s Dark Sky, the sequel to Dark Run. Here, Brooks really piles on the pressure, as the crew of the Keiko become trapped on a mining world as it bubbles over into revolution. It’s a whole new crucible in which two competing crews are combined with both sides of a lethal political conflict. The setting may have changed but the approach is the same – trap conflicting people together in a place and an event, then crank up the tension and see what breaks.

Brooks’s smart use of story crucibles makes for some exciting and entertaining novels. And it highlights a wider point – that the best stories don’t just rely on one factor to trap characters together, but on the physical, social, and historical circumstances that bind them despite who they are.

“Man walks down the street in a hat like that, you know he’s not afraid of anything … ” – Mal, Firefly

Straight up westerns aren’t all that popular these days. Despite the success of the magnificently dark Deadwood and Hell on Wheels there are very few on television, and even fewer in the cinema. Yet in sf+f we’re seeing western elements find their own growing niche. Not since Clint Eastwood sang his way through Paint Your Wagon have western mash-ups been so popular.

It all seems to have started with the science fiction westerns. Star Trek was famously sold as Wagon Train in space, and while it may not have had many western trappings it certainly dealt with many of the key themes – wild frontiers; manly men in the rugged outdoors; civilisation transformed in the face of the other.

More recently Joss Whedon put the western elements front and centre in Firefly, possibly the most mourned show ever to face early cancellation. Again he explored themes of civilisation and borderland living, along with outlaws and the lingering divisions that follow civil war. But this time there were cowboys, shootouts and even a train robbery – yeehaw!

In many ways steampunk’s a great fit with westerns. You’ve got the nineteenth century technology, outfits and attitudes. You’ve got frontier living again, combining technological and geographical frontiers. You’ve got dreams of a greater future twisted round with dark consequences. OK, so all of this was pre-empted by Wild Wild West, but now that steampunk’s properly emerged as a genre you can see the two being combined to good effect. That’s why the likes of Josh Stanton are scribbling away at steampunk westerns. Even I’ve had some success in that area.

Now we’re seeing fantasy influenced by westerns as well. Of course Stephen King’s Dark Tower has been kicking around for a while, and is something of a favourite work for King himself. But Joe Abercrombie‘s also done it with Red Country, stripping away the technology of the western but keeping its tension and drama, from the grand conflicts between settlers and governments back home to the intimate brutality of the pre-shoot-out stand-off. It’s the social side of the old west, the behaviours and the social structures, rather than the technology and fashion, and it’s utterly compelling.

Back to the beginning

It’s great to see all these mashups. I love westerns and I love to see them combined with other genres in this way. It’s why I’ve written things like A Sheriff In The Deep and The Cast Iron Kid. But you can still never go wrong by going back to the classics. So if you’ve enjoyed any of the stories I’ve mentioned above then do yourself a favour and go watch some Clint Eastwood too. Pick up Pale Rider or The Outlaw Josey Wales. They’re exciting, evocative films, and worth every moment.

Did you ever watch The 4400? How about Space Above and Beyond? I expect most people reading this watched Firefly, right? 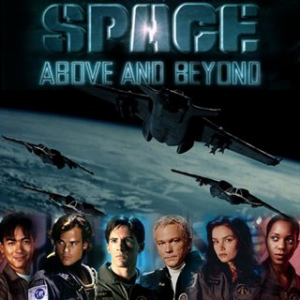 Television is increasingly seen as the home of deep visual story telling. HBO and its imitators have created shows with the depth and passion of a great novel, things like The Wire, Deadwood and Damages. Even science fiction and fantasy are having a resurgence and upping their game, with Game of Thrones being compared to the non-genre greats and new arrivals like Helix offering up the promise of something a bit different. Sure it’s not all brilliant – I didn’t get past the first episode of Falling Skies – but it’s fair to say that TV can now do deep, credible fiction on a par with novels.

But television does something that novels don’t. It gets cancelled.

I never found out why the 4400 were really sent back. I never knew which of the Wildcards made it through the war. And the fate of Serenity, while resolved in the film, still left much tantalising potential untapped. Whereas authors, barring death or distraction, will make it to the end.

And if you haven’t seen it then try to get hold of ‘Who Monitors The Birds?’, Space Above And Beyond’s twelfth episode. That show might have had some bum notes, but that one episode made it all worthwhile.