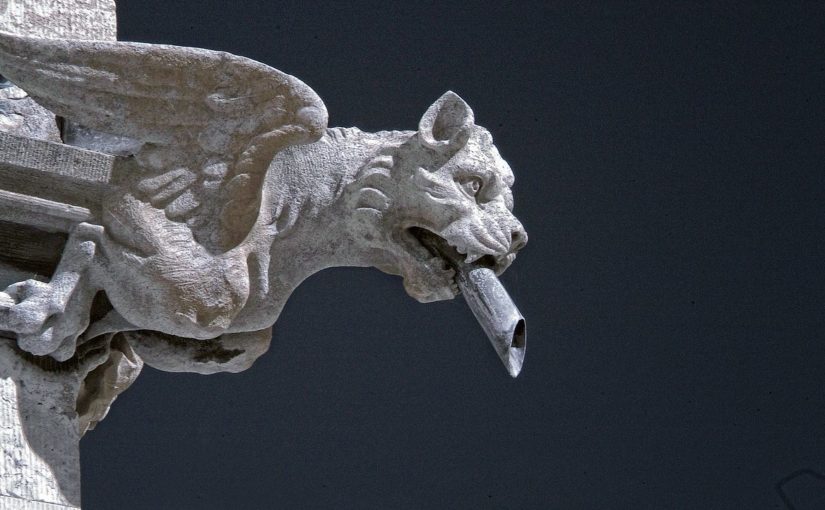 By the time the sun set, Darbelfang had spent the whole day building up his courage. Unable to move while humans roamed the world below, unable to even talk with his fellow gargoyles, he had spent hours working out what to say and to do. He knew he wasn’t worthy, but he was as ready as he would ever be.

“‘Ood ‘uck,” Ordrasy said, grinning around the pipe that protruded from his mouth.

Darbelfang hauled himself from his place above the church window and up the roof. Where the nave met the tower, he squeezed through a pointed window, his sandstone scraping against the frame, and lowered himself to the narrow ledge below.

There he saw her, carved from the purest marble, feathered wings sprouting from her back.

He forced himself to stop staring and approach before his courage evaporated. As he got near, there was a low grinding noise and she turned to smile at him.

“Darbelfang,” she said through lips that had never been disfigured by a drainage spout. “It’s nice to see you.”

She was looking straight at him! He wanted to stare into those exquisitely carved eyes, but he was too nervous and had to look away.

“I can’t understand you,” Mefolina said, looking at him quizzically. “Maybe this would be easier if…”

“Oh, ‘es!” Darbelfang retracted his pipe. For the first time in days, his own lips met. “What I meant to say was, I think you’re really pretty and really smart, and I know I’m just an ugly brute with frogs legs and donkey ears, but-”

“I don’t think you’re ugly. The ears are sweet.”

Now he’d said something wrong! This was all going horribly. Darbelfang ran a hand across the course stone of his head and took a deep breath. Better to get it all over with now, to be shot down in one single, hideous go.

“I know you’re probably busy, and you won’t have the time, but I just thought maybe we could…”

It was one thing to say this to an imaginary Mefolina, but saying it out loud, to the real her, and to face her response, it was all too much.

A hand took hold of his, its surface as smooth and pale and beautiful as bone. Darbelfang quivered.

“I’m not good enough for you,” he muttered.

She pulled him closer, smiling and unfurling her wings. Her face was inches from his. He leaned in closer, her lips parted, and-

“’Orry, ‘orry!” Darbelfang retracted his pipe. “It comes out when I’m excited.”

Mefolina laughed, then covered her mouth.

Darbelfang leaned in again. But his clumsy frog legs lost their grip on the ledge. He tottered and started to fall.

Mefolina shot out a hand, grabbed him by the ears, and hauled him back to safety.

Sitting on the ledge, Darblfang stared disconsolately at the ground below. He’d dreamed of this moment as he slept through the long days of summer, but now it had come he had ruined it.

“I should go. I’m making a terrible mess of this.”

“Please don’t.” Mefolina bit her lip. “You’re funny and you’re smart and you’re one of the few gargoyles with the courage to come talk to me here. The problem isn’t you, it’s this stupid ledge.”

Darbelfang took a deep breath. He could barely bring himself to believe what she was saying, but…

“Maybe we could go up onto the roof?” he asked, daring to look at those finely carved eyes again. “We could catch pigeons and watch the moon rise.”

Darbelfang grinned and the pipe shot from his mouth once more. It was going to be a magical night.

This story started out as a silly comment on Twitter, about writing awkward urban fantasy romance. Once again, I will take inspiration from anywhere.