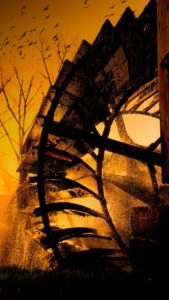 We found the first cog-bird nest while surveying for the secondary mill wheels. The creature looked down at us inquisitively from high in a willow, beneath which a stream gushed forth between the terraced fields and into the main river.

“They’re supposed to be lucky,” Aluma said. “To bless the crops.”

“If it was lucky, it wouldn’t have built its nest in a tree we need to chop down.”

Maybe the bird heard my tone or maybe it was alarmed by the whistle of the cargo barge then steaming towards us full of work crews and machine parts. With a chirping cry, it shot into the air. A single geometrically edged feather drifted to the ground.

Aluma picked it up and tucked it into her tunic.

“For luck,” she explained.

Within days, that tree was gone, and many more besides. A sprawling complex of water mills was spreading along the banks and up the tributaries. Already, wheels were turning grinding stones, ready for when the harvest came in. There had been plenty more cog-birds, most with the sense to get out of our way. The nests we found were all abandoned, left behind by refugees from progress.

On a whim, I stuck one of those nests in my storage trunk. Not for luck, of course. To examine its structure later. Many advances in engineering come from nature.

It was Aluma who told me the bad news a few weeks later.

“The crops are dying,” she said over a chorus of hammering and sawing. “The plantation owner’s threatening not to pay. Says we’ve ruined his farms.”

“That’s ridiculous!” I slammed by fist against a half-finished wheel housing. “He commissioned this complex. If he doesn’t pay up then I’ll sue.”

“That could take years,” Aluma said. “And who will hire us when they hear about it?”

I looked around at our labourers and engineers, all relying on us for their jobs, and at Aluma, who like me had sunk all her wealth into this enterprise.

I followed her up the hillside to the nearest field. Most of the grain here was fine, but the stalks at the edge were falling over. As soon as I looked at one I could see why. It was riddled with holes. Crawling out of them came a small beetle with a pearlescent shell.

“Thank goodness,” Aluma said when I showed her what I’d found. “That’s not our fault. He’ll have to pay.”

For a long moment, I held my tongue. But if I found it hard to lie, then I found it even harder not to share a deduction.

I led Aluma back to the cargo barge, where we each had a small cabin in the rear. I opened my trunk and took out the cog-bird nest. Pearlescent fragments of shell gleamed between the moss and twigs.

“The cog-birds eat the beetles,” Aluma said, slapping a hand to her forehead. “We have to get them back.”

The construction site fell silent as we called everybody from their work. Soon, they were heading up into the hills, looking for any sign of the birds.

Three days later, they were still searching, roaming ever further from the site. I sat with Aluma by the river bank, desperately seeking solutions to our self-inflicted disaster.

“Maybe the beetles are nutritious,” Aluma said despondently, twirling her cog-bird feather between her fingers.

She sighed and let the feather fall from her fingers.

A chirping sounded from within a half-built mill wheel. Aluma and I exchanged a look of desperate hope. Holding our breath, we crept towards the sound.

A pair of cog-birds perched in the centre of the wheel, building a nest in the sheltered space.

“What do we do now?” Aluma whispered. “There are no trees left for them to nest in.”

When our work crews returned, we handed them our hastily revised designs. Every mill wheel now held a small barrel at its centre, weighted so that it would stay upright while the wheel turned around it. The mill buildings had nesting platforms and nooks for birds to shelter in. And outside each building was an open-topped box that could hold straw, twigs, moss, and other nesting materials.

“This will take twice as long,” one of the foremen grumbled.

“Then you’ll be employed for twice as long,” I replied. “What are you complaining about?”

That changed their grumbling to approval. Soon, the site was full of hammering and sawing once again.

“Do you think this will work?” Aluma asked. “In time before all the crops die?”

I presented her with the feather she had dropped.