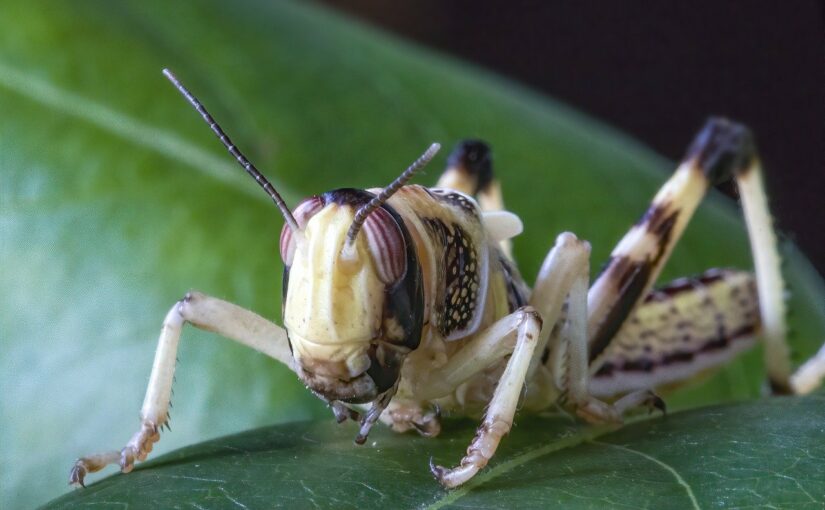 Professor Kimani stood in the doorway of Green Eden Labs, watching the locusts swarm across the fields. She smiled to herself – all was well with the world.

A jeep came tearing down the track out of the mountains, bumping and jolting, dust flying behind it. It screeched to a halt and one of the passengers climbed out.

Kimani recognised him from snippets she had seen of the rebels’ social media. A tall man with a predatory grin and a Kalashnikov hanging from his shoulder, Joseph Mburu looked like a wolf prowling into a field of sheep. He was, depending upon who she listened to, the country’s last great hero or a terrorist whose hands would forever drip with blood.

“Professor Kimani,” he said. “I hear you have performed a miracle.”

“You’re too kind,” Kimani said, certain that kindness was no a feature of Mburu, whatever the merits of his cause.

“You have genetically engineered locusts that feed crops instead of devouring them, yes?”

“Then I have come to buy your locusts.” Mburu signalled to his driver, who opened up a gym bag, revealing rolls of worn US dollar notes. “With them, I will be able to feed our poor freedom fighters and the abandoned communities they serve. You will be saving the soul of our country.”

A flash of anger shone in Mburu’s eyes.

“Be careful who you say that to, professor,” he growled.

There was a shout from his driver. A BMW was rolling sedately between the fields of wheat, light glinting off its mirrored windows. It slowed as it approached the lab, decelerating quietly to a halt. Two white men in sunglasses stepped out, holsters visible beneath their jackets. They watched Kimani and his driver as a third figure emerged from the rear of the car.

Kimani recognised her from an international conference on genetic editing. A stately blond woman wearing discreet makeup and a perfectly tailored suit, Julia McKee had the utter confidence only a CEO could carry. She was, depending upon who Kimani listened to, the world’s greatest innovator in genetic technology or a parasite preying off the work of gifted minds.

“Professor Kimani,” she said, offering her hand. “A pleasure to meet you again.”

“And you,” Kimani said, wondering if McKee actually remembered her.

While Mburu eyed the businesswoman with a hungry grin, his driver and her bodyguards exchanged tense glances, their hands inches from their weapons.

“I hear that you’ve made an amazing breakthrough,” McKee said. “That your benign locusts will drive hostile swarms away.”

“Then I have come to buy the rights to your locusts.” McKee drew a cheque from her pocket, revealing more zeroes than in the lab’s whole annual budget. “With them, I will transform pest control, empowering farmers and agricultural businesses around the world.”

“This is just a consulting fee, professor,” she said. “Our full payment will set you up for life.”

“Hey, those are my locusts!” Mburu butted in. “They’re going to feed the downtrodden.”

“They will feed the world.”

“That’s what you capitalists always claim, just before you empty our pockets.”

A car horn blared out a tinny impression of the national anthem. They all turned to watched as a limousine roared up the road from the city, flags flying from the bonnet. It ground to a halt next to the BMW and three uniformed soldiers leapt out. While one held the door open, the others pointed their guns at Mburu and his driver, who waved their own weapons back. The air was full of angry shouts as McKee’s bodyguards dragged her into the shelter of their car.

“Please, stop this!” Kimani said, trembling as she stepped between the three bands of armed men. “If any of you want me to listen, you will stop this at once.”

Reluctantly, they all lowered their weapons, and a man stepped out of the limousine.

Kimani recognised him from a hundred news broadcasts. Short and round, dressed in an overstretched uniform with a string of medals across his chest, Charles Wambui carried himself like a man used to being obeyed. He was, depending upon who Kimani listened to, either the gifted politician who had reunited a troubled country or a corrupt bureaucrat leaching her nation of life.

“Sally,” he said, ambling over with his arms held wide. Kimani stepped back to avoid what looked worryingly like it might have turned into a hug.

“Whatever you wish. I hear that you and your team have achieved amazing things, that your new locusts while breed with the old swarms, rendering them sterile and killing off these plagues.”

“Then your country thanks you for your good work. We will be providing grants to help you continue, while we take your first creations and use them to protect the harvests.”

“I don’t think you understand, professor. I am the president. I am legally entitled to-”

“Your laws are grounded in lies,” Mburu yelled. “These insects should go to the people, so that-”

“You cannot keep this technology for a single nation,” McKee interjected. “The world deserves the chance to reap the dividends of an incredible moment in-”

They all looked at her, stunned into silence.

She took a deep breath, surveyed the three most powerful people she had ever met, and tried to keep her voice from wavering.

She pointed across the fields. The swarms that had been there before were gone, flown away to protect and nurture some other crop.

“They are doing what they were made to do,” she said. “The people will benefit from it, not one of your causes.”

She turned on her heel and strode back into the lab, slamming the door behind her. 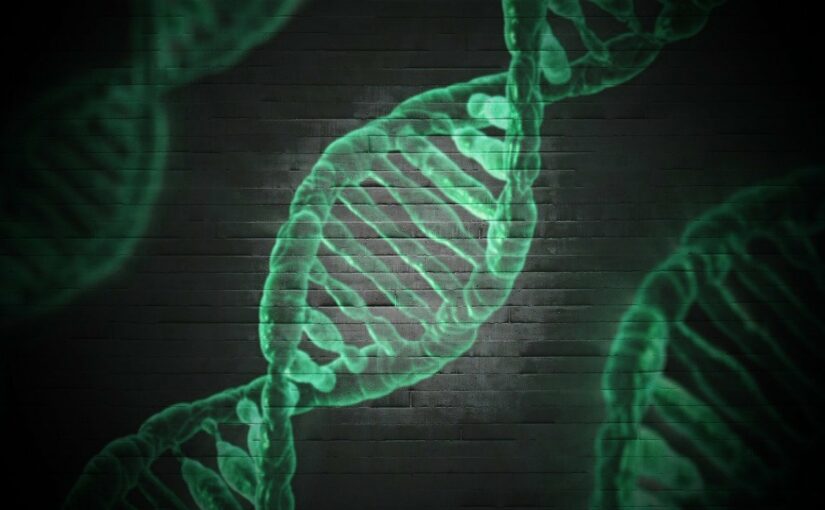 I have it at last. The final piece of the code. The last of the message hidden by God in his creation.

It took me years to understand where the code was hidden. I scoured holy books, trying to divine the secret alphabet they concealed. Years of research wasted in dusty rooms and crumbling manuscripts, scrutinising the conclusions of theologians and mystics, looking for the gaps in their work.

Then I realised that the message wasn’t in those texts, it was written into creation itself. That was why Noah had to build the ark. Each creature is a letter, and only when those letters are put together will we see God’s message for us.

I have them all now. Genetic code from every creature known to man. My computers have been analysing them, finding what is unique in each one. Those fragments of code will be the letters, and when I bring them together, joy of joys, His will be done!

I know that now is the time because now is when it has become possible. A decade ago, I couldn’t have extracted the individual letters and brought them back together, but gene editing has changed the world. This is what he preordained, calibrating our intelligence to work this out now, when the animals we know are the ones for the code. In his omniscience, he was able to see a path for us. Humanity is the tool with which he will perfect creation, and I am the sharp point of that tool.

Fingers trembling at the controls of the computer, I set the machine to put the final piece into place. What letter does the zebra represent? There is no A, B, or C here, but a holy alphabet thousands of letters long, barely comprehensible to the human mind. Still, I wonder what sound each letter represents.

The code is complete. Now it goes into the incubator, a vat of nutrients and electricity from which life can be born anew. Let it grow there, in this modern primordial soup. This is the darkness into which The Word will be breathed – a word beyond any we can fathom, recreated from the beings it set loose.

The weeks of gestation are long and gruelling, grinding my patience down to a nub. I snap at colleagues but cannot explain or excuse myself. If they knew what I was doing in the farthest corner of the lab, they would call me insane. They don’t understand. They never have.

At last the time comes for me to open the incubator. As I lift the lid, I imagine what might emerge. A glowing figure perhaps, like the Christ child in a renaissance painting. An angel even, wings spread and singing the glory of his name.

When I see it, I am struck not by wonder but by nausea. It is a terrible twisted thing, mismatched limbs barely able to drag its body out of the amniotic pool. It looks up at me with wide, desperate eyes and reaches out, dripping, toward my face. Then it collapses, gasping, twitching, hanging limp and feeble across the edge of the incubator.

This is no divine message. I have birthed an abomination.

I grab a syringe and fill it from a small and deadly vial. I force myself to touch the creature’s neck, to hold it steady while I slide the needle in. As skin meets skin, the creature looks up at me once more, pupils wide, and leans in towards me. I have to look away as I push the plunger.

I don’t wait for the abomination, still as stone now, to go cold. I haul it into a waste sack and drag it down to the incinerator. My terrible mistake is reduced to ash, its visage lingering only in my nightmares. No-one will know what I have done. I return to the lab and scrub every last surface clean.

I was arrogant, wrong-headed, thinking that I understood God’s message. In my hubris, I created something terrible and the experience has humbled me.

There is more to God’s message than just hidden letters. There is the ordering of those pieces, the spelling of His words and the grammar of His text. I must return to my studies. One day, I will complete His message for humanity, but today is not that day.