I recently finished re-reading Susan Cooper’s Over Sea, Under Stone. 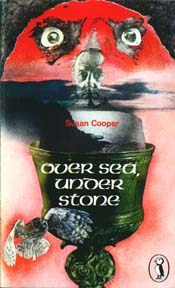 A YA novel from before marketers had invented the term ‘YA’, it’s a fantasy story about Enid Blyton-esque children pursuing a lost relic in 1960s Cornwall. When I was a kid I loved this book and the whole Dark is Rising series that it’s part of. While I enjoyed reading it again, it was a reminder of the dangers of nostalgia, and of how we’ve moved on.

The Over Sea, Under Stone I remember from my childhood was exhilarating and atmospheric, full of excitement and mystery. The experience of reading it as an adult in 2016 was somewhat different. The characters aren’t all that interesting. Their terribly old-fashioned upper-middle-class lives feel completely unreal, to the point where their family started to creep me out. The sense of excitement and danger just wasn’t there.

I had a similar experience re-watching the original Star Wars before going to see the new film. In my youth, the whole Star Wars trilogy was a magical, flawless thing. Not so watching it now. The acting is hit or miss. The pacing sometimes falls flat. Entire scenes are saved only by the presence of Harrison Ford or John Williams.

It’s tempting to put this down to growing older and losing the innocence of youth. But I like to look at it in a more positive light.

Writing and film-making have come on a long way over the decades. What made for good pacing or deep characters in the 1980s has often been surpassed. Only truly sublime works stand the test of time, and even then have to be understood in context. Creators like Susan Cooper and George Lucas helped to shape the cultural landscape, paving the way for the works that would surpass them.As times goes by we learn more as a species, and that includes improving our ability to tell stories. What has been learned is seldom lost, while new techniques are constantly developed.

As times goes by we learn more as a species, and that includes improving our ability to tell stories. What has been learned is seldom lost, while new techniques are constantly developed. Of course we get better. Of course older stories don’t stand up so well by modern standards. We don’t expect a Victorian terrace to be as warm as a modern house, or a biplane to fly as fast as a stealth bomber. Why would we expect creative technique to stand still?

I still love that the world contains Star Wars and Over Sea, Under Stone. I love that they shaped my tastes. But would I recommend them to anyone who’s now the age I was when I first found them? Probably not. The world has moved on. There are better options now, options that only exist because these came first.